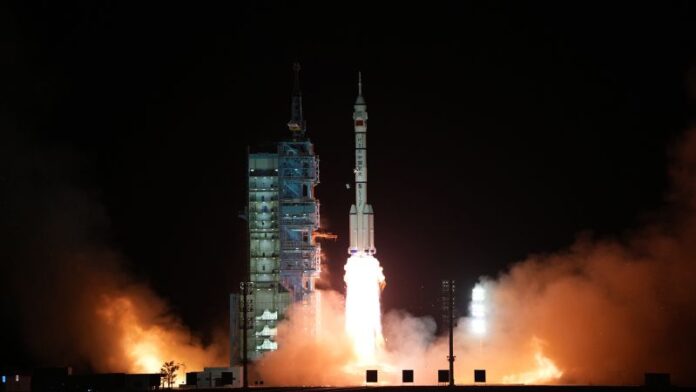 Sign up for CNN’s Wonder Theory science newsletter. Explore the universe with news on fascinating discoveries, scientific advancements and more.

Three astronauts lifted off to China’s nearly completed space station on Tuesday, marking the beginning of the country’s long-term presence in space.

It’s a major achievement for China’s ambitious space program, which has explored the far side of the moon and Mars. The milestone also means the aging International Space Station’s role as the sole venue for continuous human occupancy in Earth’s orbit is coming to an end.

The arrival of the three astronauts — Fei Junlong, Deng Qingming and Zhang Lu — will mark the first crew rotation on the space station, with two teams overlapping for five to 10 days before the Shenzhou-14 crew, who landed at the station in June, returns to Earth.

The Shenzhou-15 mission will finish the orbital outpost’s construction, expected by the end of December, and launch the first stage of “its application and development,” Ji Qiming, assistant to the China Manned Space Agency director, said at a press conference on Monday, according to state media Xinhua.

During the mission, according to state media, the crew will also conduct more than 40 experiments and tests in the fields of space science research, space medicine and space technology, as well as three to four extravehicular activities — performed by astronauts in space suits.

Smaller than the ISS

Once construction is completed, the space station is expected to last for 15 years. China plans to launch two crewed missions and two cargo missions to the station every year, according to the CMSA.

Tiangong, which means heavenly palace, is smaller than the International Space Station but similar in its modular design. The new space station will typically house three rather than six astronauts.

Officials at NASA have said it will retire the ISS, which is a collaboration between the US, Russia, Japan, Canada and the European Space Agency, in 2030.

However, Russia has threatened to quit the ISS starting in 2024, which would make operating the ISS difficult, said Dr. Stefania Paladini, a reader in economics and global security at Birmingham City University in the United Kingdom.

“There is no clarity about the future of the ISS after 2024. While the US seems committed to extend its life until 2030, Russia threatened to withdraw its participation after that date, (which would) make it extremely challenging to continue flying the ISS,” said Paladini, author of “The New Frontiers of Space: Economic Implications, Security Issues and Evolving Scenarios.”

“The Chinese Space Station may … end up remaining the only human presence in Earth’s orbit for a while.”

The new space station is expected to host around 1,000 scientific experiments during its life span.

Most of the experiments taking place on board the Tiangong will involve research originating from China, but the country has invited experiments from international researchers, including how cancer tumors react to zero gravity.

China’s astronauts have long been excluded from the ISS, due to US political objections and legislative restrictions. However, CMSA astronauts have trained with their counterparts at the European Space Agency.

It’s not clear whether China would welcome astronauts from other countries to its space station, but Molly Silk, a doctoral researcher at the University of Manchester in the UK focused on China’s space program, said she thought it very likely that international astronauts would visit in the coming years.

“Several European astronauts have been learning Chinese in order to better cooperate with their Chinese counterparts, which suggests that a visit to the CSS could be on the cards. Pakistan has also been trying to coordinate with China to send their first astronaut to space,” she said.

“This project demonstrates to the world that China has both the vision and capabilities to pull off such an immensely challenging feat. The CSS will not only allow for China and other nations to conduct experiments in space, but acts as an important checkpoint for China’s planned international research base on the moon.”

Earlier this year, the space station’s two laboratory modules — Wentian and Mengtian — docked along the Tianhe core cabin, the main living space for the astronauts.

The Mengtian lab was launched by China’s massive Long March 5B rocket, remnants of which made an uncontrolled reentry into Earth’s atmosphere in early November.

It was the fourth uncontrolled reentry for a Long March 5B rocket since China’s space agency started flying it two years ago, as the vehicle was designed without the necessary equipment to steer itself to a safe landing.