Home Culture Warwick Davis on returning to Willow – the beloved character created for... 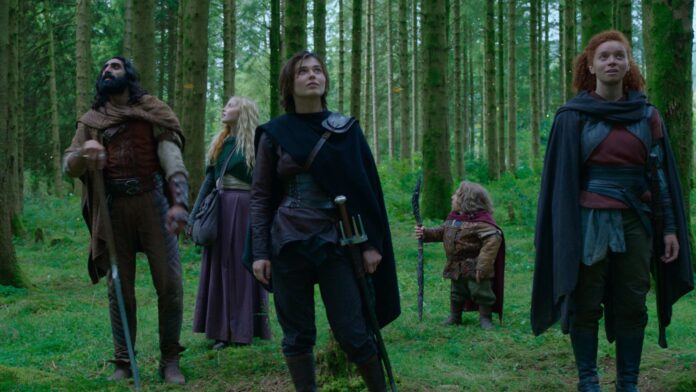 When Warwick Davis made the 1988 film Willow, he was just 17 years old.

Dreamed up by George Lucas and directed by Ron Howard, it went on to be a box office success, was nominated for Academy Awards and has an influence still felt today – the director of last year’s The Green Knight cited Willow among the inspirations for the movie.

So perhaps in an era of remakes, reboots, and sequels it was inevitable that there was more of the fantasy story about an aspiring sorcerer to come, and it is now continuing thanks to a new TV series set years after the film.

Davis told Sky News the impact the character and the movie has had on his life has been “huge”.

“Prior to Willow I’d been seen in Return Of The Jedi, well not seen – hidden behind the furry mask of Wicket the ewok – so that was my on set experience and the film Labyrinth as well, so this for me was a real leap of faith,” he said.

“Well, George Lucas took that leap of faith by writing the story for me, and it was something he originally mentioned to my mum back in 1984, he said ‘I’ve just come up with an idea for Warwick, he’s not old enough yet, but when he’s a bit older we’ll do this’ and it was Willow – he’d been sort of sowing the seeds for that many years before.”

“So for me it was groundbreaking because I had to develop acting outside of a costume where you could see my face, because inside a furry suit, like I was as Wicket, you kind of tend to exaggerate everything to get your feelings across.

“I’m acting away with my face inside that mask but nothing’s seen – so then when you take that away, you have to kind of take it all back down again and really make it natural and real and just go with your instincts, which is what I did.”

And the film’s success meant it wasn’t just Davis who was keen to continue Willow’s story – he says fans have clamoured for more for decades.

“The time I made the film Willow I was only 17, so felt that I was fairly inexperienced as an actor,” Davis explained.

“Although Ron Howard was a brilliant director and really encouraged me and taught me a lot, I still felt afterwards I could’ve done a better job – you know, maturity brings experience in life, and you can bring that sort of thing to your performance.”

“But really my keenness to do a sequel was driven by the fans who everywhere I went they sort of said ‘we want more Willow’ and their voice was loud and eventually was heard by the right people, in particular in this case, John Kasdan, who wrote the series.

“It’s one of those films that people, as they grew up watching it, they then handed on to their kids and said: ‘You need to watch this movie, it’s one I grew up with.'”

Much has changed in the film and TV business since the 1980s – with advances in technology making it possible to put anything on screen.

Davis said in that sense, the two productions felt very different while on set.

“Technology has moved on leaps and bounds and that really is down to George Lucas pushing digital technology and the work he did, you know, developing ILM [Industrial Light and Magic – Lucas’ visual effects company] and the progress they’ve made in that area,” Davis explained.

“Filming the series was very different to the film… CGI now is the way forward and back when we did Willow there was some use of CGI – it was the very first use of morphing in a movie which used computers to transform the sorceress Fin Raziel from a goat into a woman again.

“That had never been seen before, so it was groundbreaking at the time, but now in the series you can kind of pretty much do anything you can imagine – so anything John Kasdan, the writer, could imagine we could put on screen for the viewers.”

But while the tech has changed, the show’s aesthetic, and indeed the tone of the story, feels familiar, with Davis saying there were certain elements he felt had to stay true to the original.

“In my early discussions, it was very much about keeping the DNA of the film in the series – we’re making something brand new, but we had to keep that kind of ethos about Willow,” he explained.

“What made the film successful was the humour, the magic, the characters.

“And that has been what was George Lucas’ ethos in the stuff he makes – it’s all about character, that’s what drives it, and story – so a really good story and great characters you can identify with.”

The actor, who’s made multiple appearances in the Star Wars franchise as well as the Harry Potter films, and many others, says he’s seen the impact of Willow for his whole career.

“And now people are hearing about the series they’re so excited.

“Grown men run up to me at petrol stations and say, ‘hey, there’s a series, I’m so excited to see this’, which is wonderful.

“We make such a lot of effort filming these things, so when people appreciate it and are excited for it, that makes it worthwhile.”

Willow is streaming on Disney+ now.