Home World China could have 1,500 nuclear warheads by 2035: Pentagon report 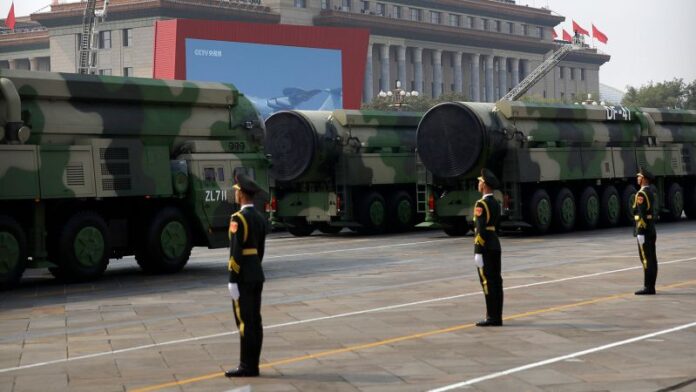 China’s stockpile of nuclear warheads has surpassed 400 in a fraction of the time previously estimated by the United States, a major Pentagon report revealed, with Beijing focusing on accelerating its nuclear expansion as it seeks to challenge the US as the world’s top super power.

In 2020, the US estimated that China had nuclear warheads numbering in the low-200s and expected the stockpile to double within a decade. Just two years later, China has reached that mark and could have some 1,500 nuclear warheads by 2035 if they continue to expand their stockpile at the current pace, according to the 2022 China Military Power report released Tuesday.

“What we’ve seen really in the past couple of years is this accelerated expansion,” said a senior defense official.

The world’s most populous country is using its burgeoning military as one of its tools to create an international system that favors its world view, posing the “most consequential and systemic challenge to US national security,” according to the report, and the larger nuclear capability is a far cry from what China used to call a “lean and efficient” nuclear deterrent. Beijing’s investment in its nuclear triad – sea, land and air-based nuclear launch options – is cause for concern in Washington.

“We see, I think, a set of capabilities taking shape and new numbers in terms of what they’re looking to pursue that raise some questions about what their intent will be in the longer term,” the senior defense official said in a briefing to reporters about the latest report.

The official also offered new details about the Chinese test of a hypersonic missile in July 2021 that flew around the world before hitting its target, an accomplishment that drew attention to the lagging pace of US hypersonic weapons development. The official said the Chinese system flew 40,000 kilometers and demonstrated the longest flight of any Chinese land attack weapon to date.

The Chinese military, formally known as the People’s Liberation Army, is also developing space and counterspace weapons, the report said, viewing the advanced technology as a way to deter outside intervention in a regional military conflict.

China has a standing army of nearly 1 million soldiers, the largest navy in the world by number of ships, and the third largest air force in the world, according to the report.

The 2022 National Defense Strategy, released last month, identifies China as the pacing challenge for the United States, a point often reiterated by the Pentagon’s top leaders.

“China is the one country out there that geopolitically has the power potential to be a significant challenge to the United States,” said Joint Chiefs Chair Gen. Mark Milley at a news conference earlier this month. “Based on their population, their technology, their economy and nano and a bunch of other things, China is the greatest geopolitical challenge to the United States.”

Tensions between Beijing and Washington frequently revolve around Taiwan, a democratic, self-governing island. China sees the island as a fundamental part of its sovereign territory, including the South China Sea, and defense officials have previously said it intends to have the capability to use military force to take Taiwan by 2027.

In the latest report – officially called the Military and Security Developments Involving the People’s Republic of China – the US does not anticipate an imminent invasion of Taiwan. Instead, the report said, the US has seen Beijing ramp up diplomatic, economic, political and military pressure on Taiwan.

US House Speaker Nancy Pelosi’s historic visit to the island in August marked a new stage in China’s efforts, as Beijing used the visit to attempt to establish a new normal around Taiwan.

Since the visit, China has crossed the center line of the Taiwan Strait more frequently, the defense official said, a move they would only use infrequently in the past. In addition, there is more naval activity around Taiwan and a large number of Chinese aircraft flying into Taiwan’s self-declared air defense identification zone.

“Even though we don’t see an imminent invasion, that’s sort of an elevated level of intimidating and coercive activity around Taiwan,” the official said.

Two weeks ago, President Joe Biden met Chinese President Xi Jinping in-person for the first time during his presidency at the G20 summit in Indonesia. Biden described the 3-hour meeting as “open and candid,” and he laid out the US approach to one of the most important bilateral relationships in the world as one of competition and not conflict.

Biden also focused on the need for maintaining open lines of communication between Beijing and Washington. China cut off several contacts and meetings with the US following Pelosi’s visit to Taiwan. Defense Secretary Lloyd Austin, who met his Chinese counterpart in Cambodia last week, also emphasized the need for communication, according to a readout of the meeting.

The report also looked at the relationship between Russia and China. The two countries issued a joint statement on February 4, signaling a desire for ongoing partnership and cooperation. Beijing and Moscow have “complementary interests” in terms of their national security and a shared approach to international relations. But the Russian invasion of Ukraine just weeks later has complicated the relationship in ways that may not be fully clear yet.

“Of course it’s going to be an area of keen interest for us and other observers in Europe and elsewhere,” the official said. “We’ve seen the PRC kind of continue to support Russia diplomatically and to amplify a lot of their propaganda and disinformation. And so those are areas of particular concern.”