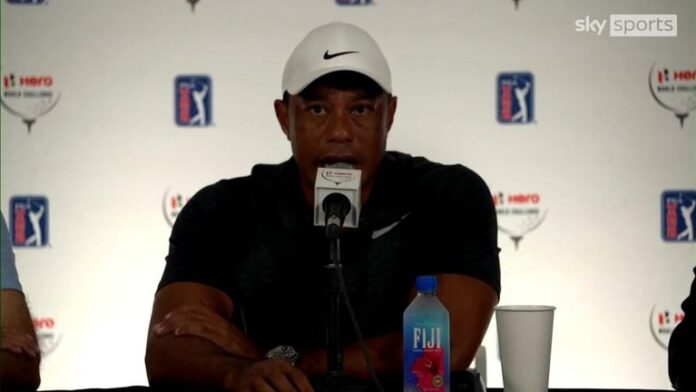 Tiger Woods has backed Rory McIlroy’s suggestion that Greg Norman needs to leave LIV Golf to enable talks with the PGA Tour to go ahead; Woods is impressed that McIlroy has managed to maintain his strong form amid the controversy

Tiger Woods says Rory McIlroy has proven himself to be a “true leader” amid golf’s ongoing civil war between the PGA Tour and LIV Golf.

McIlroy, who is the chairman of the PGA Tour’s player advisory council, has repeatedly spoken candidly amid the ongoing controversy caused by the emergence of the Saudi-funded breakaway LIV circuit.

Woods on Tuesday backed McIlroy’s suggestion that the two organisations could come to an agreement – and drop their lawsuits against each other – if chief executive Greg Norman were to leave LIV.

“What Rory has said and done are what leaders do,” Woods said of his McIlroy, who currently sits atop the world rankings.

“Rory is a true leader out here on Tour.

“The fact that he’s actually able to get the things he said out in the public eye, be so clear-minded with it and so eloquent with it, meanwhile go out there and win golf tournaments on top of that, people have no idea how hard that is to do, to be able to separate those two things.”

Despite failing to add to his haul of four major titles, McIlroy finished in the top 10 at all four majors in 2022, narrowly missing out as runner-up at The Masters in April before coming third at The Open at St Andrews in July.

“Everyone respects him and they respect him because not just his ball-striking, his driving, but the person he is.”

Woods: I tested negative for Covid-19 at The Open

Woods also addressed comments McIlroy made earlier this week in which the Northern Irishman said he thought he had given the 15-time major champion Covid-19 ahead of The Open.

In an interview with Ireland’s Sunday Independent, McIlroy revealed he had fallen unwell during the JP McManus Pro-Am in Ireland that preceded The Open, and that Woods, who he had been spending time with, also suffered symptoms of ill health.

McIlroy didn’t confirm whether he had tested positive for Covid-19, but said he didn’t have any taste during The Open.

Woods admitted he didn’t feel well, but said he returned a negative result after taking a test.

“I got tested,” Woods said. “I was always negative.

“I was feeling under the weather, yes, wasn’t feeling great the whole week, but I never got a positive test.”