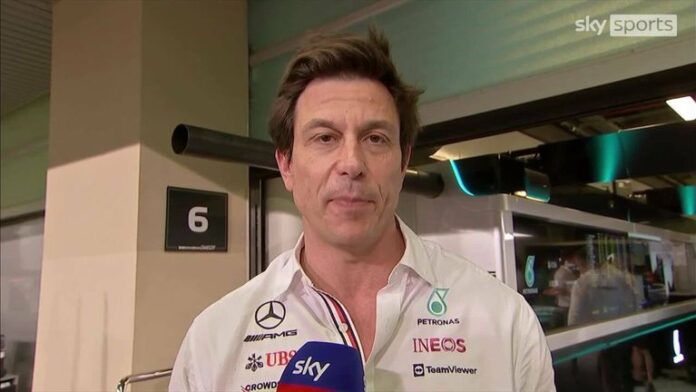 Ferrari and Red Bull went on downward spirals after their Formula 1 title eras ended and Mercedes boss Toto Wolff says: “We are looking at that and thinking… we better be careful”; Wolff says 2022 less painful than 2021 despite poor form, due to the Abu Dhabi finale

Mercedes boss Toto Wolff has urged his team to be “careful” to avoid the post-title slumps suffered by Red Bull and Ferrari, but has reiterated that 2022 – which he insists was less painful than 2021 – was necessary to “re-energise” the Formula 1 powerhouse.

Mercedes’ record-breaking run of eight straight championships came to a crushing end in 2022, with the Silver Arrows dropping to third in the standings and only managing one race victory all season.

Such a fall from grace led to Wolff facing questions after the season-ending Abu Dhabi GP if Mercedes were worried about their future as a top-running team – with Ferrari (without a title since 2008) and Red Bull (trophy-less from 2013 to 2021) having struggled in the seasons after their championship eras ended.

“Of course we are talking about it, we are analysing what are the reasons the teams that dominated in the past suddenly lost performance?” responded Wolff.

“You can see with Ferrari, they lost the whole top leadership and a key driver… I think that’s something you can trace back.

“With Red Bull, it was a fundamental situation that the power unit regulation changed upside down, and no works deal. So fundamental parameters changed.

“We are looking at that and thinking… we better be careful. A season has gone by in a heartbeat and we can’t let it happen to look back at the end of next season and the one after, saying ‘that’s bitter’.”

Wolff added that he was confident Mercedes would “avoid the mistakes”.

“We have the same organisation, the same capability, the same funding,” he said. “The other pillars are still in place.”

Mercedes also believe a season such as 2022 was key to them achieving future success.

“We are 100 per cent sure that this was a year that was necessary for us to re-energise and re-motivate the team,” explained Wolff. “This has again brought us down to the ground, made us appreciate how you win and also understand how difficult it is to recover.

“We’ve started the 100 metre sprint 10 metres behind everyone… so we’ve just got to run faster. This organisation has all it’s needed to run faster.”

Mercedes will be aiming to bounce back next season, particularly against Red Bull after their whopping 205-point title victory.

“There’s no fear, but we need to be sharp.” said Wolff.

“I’m a glass half-empty man. I’m not sure at all we can bounce back to a position where we can fight for championships.

“You need to acknowledge that the competition is strong but we will do everything in our power to set our objectives and try to beat them.”

Wolff also insists 2022 was less painful than the 2021 season, when Mercedes had a title-winning car but had Lewis Hamilton being denied the drivers’ crown to Max Verstappen in a controversial Abu Dhabi GP finale.

Asked which of the two seasons were more painful, the team principal said: “Last year, without any doubt.

“Last year was strong and how it ended… it’s out of control. It was the first time I had lost control since I was an adolescent and in my sense of fairness, that was totally against my values.

“This year was not as peaky in terms of the emotions because we knew from the get-go that the car was just not good enough.

“We know it was our doing… Abu Dhabi wasn’t. We knew we got it wrong. We’re conscious others did a good job, and this is an absolute meritocracy how it worked out. This is OK.”