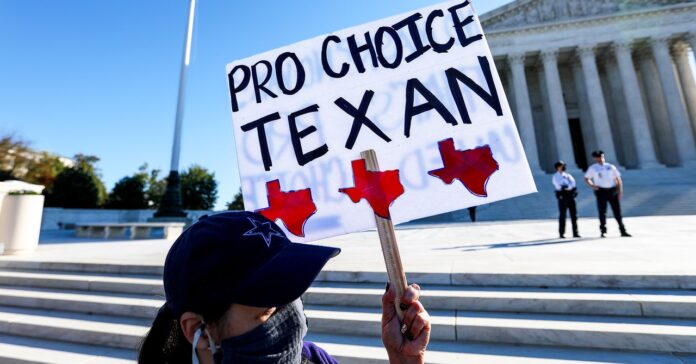 Rebecca was getting ready to start her work day at Apple this June when she heard that the US Supreme Court had overturned Roe v. Wade. The decision would trigger laws banning or restricting abortion in 13 states, including Texas, where she lived. Gutted by the news, the Austin-based corporate employee debated skipping work, but pressed ahead.

As the day unfolded, Rebecca waited for Apple’s leaders to acknowledge the impact of the court’s decision on its workforce, particularly those like her living in states that were poised to outlaw abortion. Restrictions on abortion not only limit women’s reproductive choices but also can endanger the lives of anyone who needs emergency medical treatment while pregnant. She hoped the company would also publicly condemn the Supreme Court’s decision. All she got was a mass email reminding employees that their health plan covered out-of-state travel for medical care.

For weeks afterward, Rebecca heard nothing further from Apple management—until employees started calling for answers. But when managers in Texas held “listening sessions” about abortion concerns, they were at times worryingly evasive, she and other attendees told WIRED, and said company policy forbids workers—even those fearful of anti-abortion laws—from switching to remote work or transferring to an office in another state. (Rebecca asked that her real name be withheld because she fears losing her job.)

Apple is one of several large Silicon Valley companies that have expanded in or migrated to Texas over the past few years, putting down roots on very different political terrain than that in California. Now the company and its generally progressive-leaning workforce are reckoning with the spread of tighter restrictions and outright bans on abortion.

In 2021, Texas legislators passed a law known as SB8 that effectively outlawed abortions after six weeks by encouraging residents to sue anyone who helped a person access the procedure. At the time, most Apple employees were working remotely. But by the time Roe fell, further restricting abortion access in Texas, Apple was in the middle of a contentious return-to-office campaign. Meanwhile, construction of a $1 billion campus in northwest Austin, which the company has said may eventually host 15,000 workers, continued apace. Now employees were hearing that anyone based out of the company’s Texas offices who did not want to live under the state’s laws had to choose between their reproductive rights and their job. Those unable or unwilling to leave faced a potential minefield of health care decisions.

Many people in the US faced similar or worse hurdles after Roe was overturned: The lowest-income workers experience the highest rates of unintended pregnancies, and many lack health insurance. Lots of companies in tech and other sectors have said little about the court’s decision. But for some Apple employees attracted by the company’s previous outspoken support for progressive social issues such as gay and transgender rights, its silence on the issue stung.

“A lot of people join Apple because Apple tries to task itself with doing better,” Rebecca says. “The reaction, or lack of reaction, was a huge slap in the face.” Some Texas employees felt scared and adrift, unsure whether they could transfer out of the state or how reliably the travel policy would protect them. Some hesitated to even ask managers about abortion access, fearing retaliation from bosses who might support restricting access to such care.

In one Apple division, some senior managers in Texas agreed to host listening sessions for employees to air concerns. They varied in size from one-on-one meetings up to group sessions with dozens of employees, according to Rebecca and two other attendees who asked to remain anonymous and allowed WIRED to review their notes. “I think there were enough rumblings within the organization that they had to react at some point,” one employee says. “Obviously it would have been better if it was proactive.”