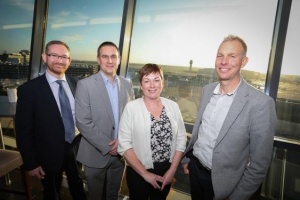 Manchester Airport has unveiled plans to become the first UK airport with a direct supply of low carbon hydrogen fuel, announcing a partnership with HyNet – one of the UK’s leading Government-backed industrial decarbonisation projects.
The airport has signed a Memorandum of Understanding (MoU) with the two founding partners of HyNet. Progressive Energy, which develops projects to decarbonise the energy sector, and Cadent, which will build and operate HyNet’s hydrogen pipeline network.

Through the MoU, the partners are aiming to deliver hydrogen to the aviation sector at the earliest opportunity, including through the connection of Manchester Airport to a pipeline being developed by HyNet.

The announcement has been backed by Aviation Minister Baroness Vere and Energy and Climate Change Minister Graham Stuart, as well as the Northern Powerhouse Partnership and North West Hydrogen Alliance.

Hydrogen technology will play a key role in decarbonising the aviation sector with hydrogen-powered aircraft expected to come into operation from the mid-2030s for short-haul journeys. A research project conducted by FlyZero involving Manchester Airports Group (MAG) estimated that the demand for liquid hydrogen at an airport the size of Manchester could be 6.5 million litres a day by 2050.

HyNet brings together the technology and infrastructure needed to move the region rapidly zero future, including producing low carbon hydrogen that can be used to power aircraft of the future. As a result of the MoU signed today, the partners will work together to assess the future demand for hydrogen for aviation and explore the feasibility to connect Manchester Airport to HyNet’s regional network.

With this connection, the airport aims to be the first to establish a direct pipeline of hydrogen, to supply any of its 60+ airlines with the sustainable fuel at the earliest opportunity, forming a key component of wider plans to decarbonise flying. The process also aims to drive innovation and the creation of green jobs for the region.

“This announcement demonstrates the meaningful action we are taking to ensure we can deliver a carbon-free future for the aviation industry.

“The partnership between Manchester Airport and HyNet is a significant step forward for the future use of hydrogen across the North West, building a more sustainable future for the region.

“By securing a direct supply of hydrogen for our airport, our 60 airlines will be able to make use of this exciting and ground-breaking technology as soon as possible.

“The use of hydrogen will make a significant contribution to the UK aviation sector’s decarbonisation efforts and supports industry partners in reaching net zero.”

Aviation Minister Baroness Vere said: “Hydrogen offers great potential to decarbonise flying, but we need the right infrastructure at our airports to help harness that opportunity.

“We are funding the multi-million pound Zero Emission Flight Infrastructure project, which has already published important findings, and it’s great to see industry now pushing ahead in this area to make zero emission flight a reality”.

Energy and Climate Change Minister Graham Stuart said: “Set to be the new superfuel of the future, hydrogen will be essential in powering UK industries, including the aviation sector, as we move toward ending our dependency on fossil fuels.

“This new partnership is an exciting step that will help put the North West at the heart of efforts to make the UK a world-leading hydrogen economy.”

A panel event held to mark the signing of the MoU was attended by 30 leading figures from the industry, including:

The panel discussed what would be required to realise a hydrogen future for aviation, and how decarbonisation clusters like HyNet can work with the industry to service its demand for the new technology and infrastructure.

Following the panel event, Manchester Airport and HyNet’s political and industry partners sat down for a roundtable discussion about the partnership’s next steps and what support could be offered to accelerate hydrogen use in the North West. Those organisations in attendance included the Aerospace Technology Institute (ATI), Connected Places Catapult, the Zero Emission Flight Group Secretariat, Greater Manchester Combined Authority and Liverpool City Region.

HyNet will begin to decarbonise the North West from the mid-2020s. By 2030, it will be capable of removing up to 10 million tonnes of carbon emissions from across North West England and North Wales each year – the equivalent of taking four million cars off the road.

Chris Manson-Whitton, CEO Progressive Energy said: “HyNet will transform the region by the mid-2020s through delivering low carbon hydrogen produced locally at the UK’s first facilities including Vertex Hydrogen and a range of electrolytic plants.  We have a huge level of demand for HyNet hydrogen from across the North West and North Wales from a range of sectors stretching from glass and paper to food and drink to consumer goods.

“HyNet will enable the decarbonisation of industry and transport sectors and, by developing a hydrogen economy, is set to generate a £17 billion economic impact for North West England and North Wales, providing a much-needed boost for businesses across the region.

“We are extremely pleased to be working with Manchester Airport to make a significant impact on decarbonising aviation as we all play our part in reaching net zero and combating climate change.”

Manchester Airport – as part of MAG – has a target to make its own operations net zero carbon by 2038, 12 years ahead of the UK national target and two years ahead of the target set for UK airports in the Government’s Jet Zero Strategy. The use of hydrogen fuel technology will play a pivotal role in aviation decarbonisation, alongside other levers including airspace modernisation and the use of Sustainable Aviation Fuel (SAF).

This announcement on hydrogen technology comes a year after MAG announced its partnership with Fulcrum BioEnergy UK which aims to make Manchester Airport the first in the UK to have a direct supply of SAF from the mid-2020s.

This means that the UK’s third largest airport is making progress towards the supply of both sustainable aviation fuel and hydrogen, laying the foundation for airlines to operate low and zero emission flights in the future. Manchester Airport is also working with Progressive Energy on how its own onsite infrastructure can be adapted to deliver this technology into reality.

Manchester Airport recently became a member of the North West Hydrogen Alliance (NWHA), a regional body which brings together organisations with the aim of developing the North West in to the UK’s primary hydrogen economy.

To support the publication of the Government’s Jet Zero Strategy in July this year, MAG issued five Jet Zero Pledges to support the decarbonisation of UK aviation. One pledge incentivises the Group’s airlines to operate emission-free transatlantic flights, offering five years of free landing fees, and sits alongside others including commitments to improving education and PhD research on decarbonisation.

MAG’s long-term sustainability plans are detailed in its CSR Strategy “Working together for a brighter future”, published in 2020. Alongside the 2038 net zero target, the Strategy sets out other decarbonisation initiatives and incentives including a commitment to introducing emission-based landing fees for airlines and the publication of league tables in the future.

Henri Murison, Chief Executive of the Northern Powerhouse Partnership said: “The partnership between Manchester Airport and HyNet is another fantastic example of the North of England being at the forefront of the UK’s green energy revolution, supporting jobs and growth as well as moving us steps closer towards Net Zero.

“Hydrogen will play an important role for the future of fuels in the UK, and it is pleasing to see developments in how we can ensure Manchester Airport has a direct supply of low-carbon hydrogen fuel that will provide benefits across the wider region.”

Tim Alderslade, Chief Executive of Airlines UK said: “UK airlines are fully committed to achieving net zero emissions by 2050. Hydrogen is an important part of the realisation of this goal, alongside SAF, carbon removals, airspace modernisation and other pathways, and offer exciting potential in the interim on shorter routes, including domestically in the UK.

“Airport infrastructure for hydrogen will be vital to enabling future zero emission aircraft to operate, so we welcome today’s announcement by Manchester Airport and HyNet, and look forward to working with other UK airports on similar projects. Collaboration across UK aviation and aerospace is the only way we will hit net zero, and as airlines we remain committed to playing our full part in this shared endeavour.”

Professor Joe Howe, Chair of the North West Hydrogen Alliance and Executive Director, Energy Research Institute at the University of Chester, said: “The partnership between Manchester Airport and HyNet is a great example of how hydrogen can play a leading role in delivering net zero ambitions on a monumental scale here in the North West.

“The fact that Manchester Airport could become the first UK airport with a direct supply of low-carbon hydrogen fuel is an exciting prospect as we work towards creating a cleaner, greener, more sustainable future for the region.”