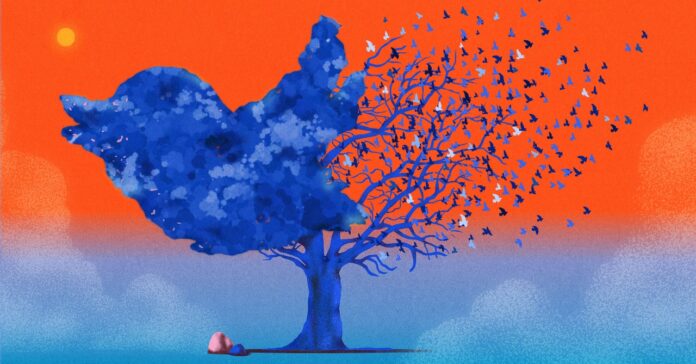 Think of how devastating it was to the anti-vax influencers Alex Berenson and Robert Malone to be kicked off Twitter. They happened to be grifters. But if Twitter died, that devastation would be everywhere. Hundreds of thousands of people’s careers are now driven principally on Twitter. Many academics have built popular audiences entirely on Twitter, as well as enriched their professional networks. The chatter among otherwise siloed young professors and postdocs on there has become indispensable.

Twitter taught us things. We’ve learned we can dare to enter spaces—rooms where the gentry are speaking—we might not have tried to get into before. And at the same time, we’ve learned that the way to be heard and make a difference is to amplify other ideas instead of coming up with our own.

I think some people are embarrassed to admit what Twitter has really come to mean for them. “[I] would gladly pay $100 a month to keep Twitter alive,” a comedian with 34,000 followers recently tweeted. The ratio against him was merciless. It’s uncool to say you sincerely care about Twitter. Users accused the comedian of being a lame-ass, a suck-up, an elite: “Wow so to you $100 is cheap?” “I’d probably pay $100 to kill Twitter instead.”

But I’ve noticed that political strategists and academics have begun begging their followers not to leave the app. They typically couch these appeals as pleas for the sake of some greater good or community. And yet they’re often figures who have come to have thousands of readers they never could influence without Twitter. And, because any bid not to lose followers inevitably comes off as shamefully status-seeking, their pleas are often ignored. But many are just pleading for their livelihoods, and we should listen.

A virtual civilization that became vital to our world is shuddering. A lot of the best reporting on what’s going on at Twitter has been revealed on Twitter, by citizen journalists and employees of the app as well as professional investigative reporters; we are gradually being plunged into a kind of dark. Twitter’s “Trending” column, even recently, was useful. The other day, Twitter told me the top trending topic where I live, in South Africa, was Tylenol, a brand that is not even sold here. When I wondered what was trending in Athens and located myself there via VPN, I received the unnerving news that Dan Quayle is trending at the Parthenon.

In Rome, Mike Pompeo was trending. I assume that’s because his last name is Italian and no real minds exist at Twitter to curate trends anymore, only an algorithm that catches tailings of fuel in the form of tweets and lights them on fire at random, like a downed electric line in a hellscape throwing sparks at the massive oil slick left by the careering 30-ton tanker truck that is Elon Musk’s vanity.

I remember learning about the Roman Colosseum in elementary school. It was built at Rome’s apex, for games, historical reenactments, forums, and funerals. The elite ran the show, in one sense, but 95 percent of those who went there were ordinary people—women, the poor, foreigners. As Rome swelled and became decadent, the Colosseum increasingly turned into a space for brutal spectacle, where exotic imported animals tore condemned men apart for onlookers’ pleasure. I remember learning that the Colosseum was abandoned after Rome was sacked in 410 AD.

I learned more recently that this isn’t true. The Colosseum was never abandoned entirely. Over a century  later, long after the king of the Visigoths tore through Rome,  animal hunts were still held there—though pettier ones, with deer instead of tigers.

As central organization broke down, hawkers combed the stands to lure people to sideshows while craftsmen set up ad hoc shops, a little like the way Twitter users are now desperately directing their followers toward their accounts on other platforms and the “elite business professors” are popping into comments to tout their crypto schemes. Twitter users are now imagining their last tweet, immortalized as a moment in history: “Like, right when I fire off something thirsty about Paul Newman’s ghost … the site crashes forever.” But it’s most likely that Twitter will shamble on for a long time, like the Colosseum did, and we’ll never quite know if we’re participating in its glorious and hilarious finale. I actually think the prospect of Twitter’s rapid demise—in weeks or months—is functioning, right now, as fantasy. It’s a fantasy that absolves users of the need to adjudicate for themselves the point at which it’s become truly dangerous or useless.