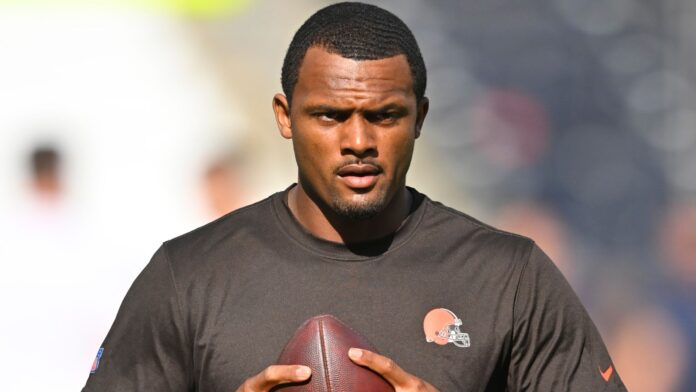 Deshaun Watson served an 11-game suspension and was fined $5m after being accused by more than two dozen women of sexual assault and misconduct during massage sessions; Hannah Wilkes presents the Her Huddle podcast, a weekly show which celebrates women working in and around the NFL

It’s really hard to focus purely on the match-ups and playoff storylines present in the NFL as we enter Week 13.

I would love to use this space to speak solely about the playoff-clinching scenarios, the deep NFL Fantasy sleepers who could prove the difference makers, or the excitement of an AFC Championship rematch between Patrick Mahomes and Joe Burrow on Sunday.

But I can’t. Because this week Deshaun Watson returns as a starting quarterback in the NFL.

And while he may be able to get back to his $46m-per-year job, there are multiple women who have sought counselling, closed their businesses and suffered with their mental health allegedly because of his previous behaviour. It’s not ‘back to normal’ for them.

Spotify Due to your consent preferences, you’re not able to view this Privacy Options

This isn’t conjecture. This is evidenced by Sue L. Robinson, the former federal judge appointed by the NFL and NFL Players’ Association to investigate the complaints of sexual misconduct and assault by Watson.

Her report listed how some of the women interviewed sought professional help, suffered sleepless nights and depression, and felt unable to return to the job that they loved. It all fed into the conclusion that the NFL proved “by a preponderance of evidence” that Watson engaged in sexual assault as defined by the NFL, that his conduct posed a “genuine danger to the safety and well-being of another person”. His conduct undermined the integrity of the league.

I know you know all this, I know it has been discussed multiple times and in multiple ways. I know that if you are someone with the slightest moral compass, you find it at the very least unsettling and uncomfortable that Watson is returning to the sport so soon and on such a lucrative contract that secures him the most guaranteed money in NFL history.

I also know that, according to the attorney Tony Buzbee, most of the women involved in filing the suits against Watson do now want to move on with their lives, quite rightly so too, but that doesn’t mean we should stop talking about it.

It still matters because, in the face of allegations from more than two dozen women – 23 suits settled and two still pending – one man gets to return to business as usual.

It matters because those women were forced to release their names in order for their claims to be legitimised.

It matters because Calvin Ridley was banned for an entire season and fined $11m for making a $1,500 dollar bet on an NFL game. Watson was suspended 11 games and fined $5m.

It matters because if you know a woman (and I’d be amazed if you’ve never met a single one of us, we are everywhere), then I almost guarantee that you actually know a woman who’s suffered some form of sexually inappropriate behaviour. Know a woman that has had comments made in a space where she should feel safe and protected, felt like something was “a bit off” but likely didn’t want to make a fuss or “blow it out of proportion”. And this is me talking in the mildest of terms.

It matters because, despite having complied with his mandated counselling sessions and rolling out the “I’m sorry if I triggered anyone” line, Deshaun Watson hasn’t actually, genuinely, apologised. At least beyond the awkwardly-staged preseason interview in which he said sorry to “all of the women that I have impacted” before once again denying any wrongdoing merely days after his 11-game suspension had been agreed.

It’s worth recalling that prior to the aforementioned ‘apology’, Sue L. Robinson had noted Watson’s lack of remorse in her decision-making, which the NFL had stated they would appeal.

It matters because the sum of all these parts is a system and a culture where women are repeatedly told, in a myriad of ways, that they are ‘less than’. Their experiences are less important than the ability of an elite sportsman. Their collective voices are less powerful than a wealthy man. That they, essentially, don’t matter.

In a sport that celebrates diversity and inclusion, one which is patting itself on the back for the number of women in coaching jobs, celebrating more women than ever in executive boardrooms and applauding having more female fans than ever, it matters.

Reed hits back over Dubai rules ‘non-issue’ | ‘Some people love...