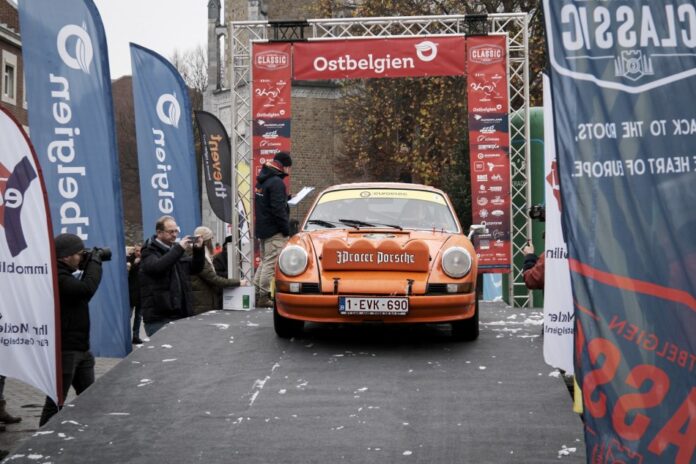 The first leg of the Ostbelgien Classic saw the no8 Porsche 911 of Belgian crew Yves Deflandre and Jennifer Hugo out in front with 16.35 penalty points, 7.45 penalty points ahead of the second placed FIA Trophy for Historic Regularity Rallies contender Jean-Jacques Martens and Aswin Pyck in the no3 Volvo PV444.

The day started with snow falling on the city of Eupen but by the time the cars took to the start ramp the weather had cleared but it was still grey and cold.

In the final Leg 1 standings the two leading FIA cars were split in the overall standings by the no21 Ford Cortina Lotus, which was competing in the Classic Plus category but not in the standings for the FIA THRR.  Third in the FIA standings after Leg 1 was the no14 Porsche 911 of Geert and Cedric De Jaeger, the Belgian crew on 24.33 points, just 7.98 behind the leaders.

Reigning FIA THRR Champions Stanislaw and Anna Postawka finished the 21st overall and 12th in the FIA standings, the father and daughter crew finishing the day in the no1 on 543.55 penalty points, after picking up 528.97 points on RT02 after suffering a technical issue, 527.2 behind the leading car.

Leg 2 of the Ostbelgien Classic will begin at 08h00 in Eupen on Saturday morning with 246km of tests ahead of the competitors, with the day concluding around 18h50 in Weiswampach in Luxembourg, where the teams will enjoy an overnight stop before the final day of competition on Sunday.