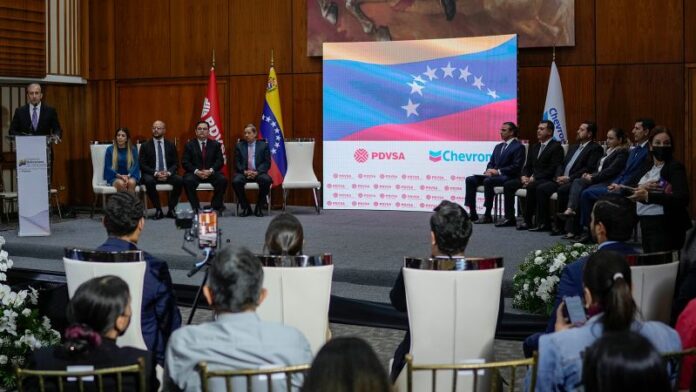 The Venezuelan government and American oil company Chevron have signed a contract in Caracas on Friday to resume operations in Venezuela, according to the country’s state broadcaster VTV.

“This contract aims to continue with the productive and development activities in this energy sector, framed within our Constitution and the Venezuelan laws that govern oil activity in the country,” said Venezuelan oil minister Tareck El Aissami, who was slapped with United States sanctions in 2017.

He attended the signing ceremony along with representatives from Venezuelan state-owned oil and natural gas company PDVSA and Chevron.

The move comes after the United States granted Chevron limited authorization to resume pumping oil from Venezuela last week, following an announcement that the Venezuelan government and the opposition group had reached an agreement on humanitarian relief and will continue to negotiate for a solution to the country’s chronic economic and political crisis.

The US has been looking for ways to allow Venezuela to begin producing more oil and selling it on the international market, thereby reducing the world’s energy dependence on Russia, US officials told CNN in May.

A 6-month license was granted to Venezuela by the US Treasury Department’s Office of Foreign Assets Control (OFAC) last week, and the US can revoke it at any time. Additionally, any profits earned will go to repaying debt to Chevron and not to the Maduro regime, according to a senior official.

In 2017, OFAC said El Aissami had played a “significant role in international narcotics trafficking,” according to a news release.

In addition, the department said El Aissami is linked to coordinating drug shipments to Los Zetas, a violent Mexican drug cartel, and provided protection to a Colombian drug lord.