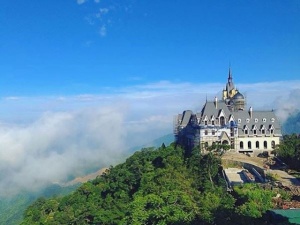 The People’s Committees of northern Vinh Phuc province and Tam Dao district held a ceremony on December 2 to announce the award honouring Tam Dao as the world’s leading town destination in 2022.

The title was previously announced at the 29th World Travel Awards held in Oman in November this year.
Addressing the event, Vice Chairman of the provincial People’s Committee Vu Viet Van said the award is a recognition of the initial success of the district’s tourism sector, helping to improve the position and value of the Tam Dao National Tourist Area, and promoting the development of the tourism industry in Vinh Phuc province.

The Tam Dao national tourism site is located on Tam Dao mountain range, at an altitude of 54 to 1,100 metres above sea level. It boasts majestic mountainous scenery that covers a vast area of the northern delta.

In Tam Dao, there are three mountains, Thach Ban (1,388m), Thien Thi (1,375m), and Phu Nghia (1,400m), rising above the sea of clouds like three islands. That is the source of the Vietnamese name “Tam Dao,” meaning “three islands.”
Thanks to its cool climate, the town has long been one of the most attractive destinations in northern Vietnam among both domestic and foreign visitors, especially for a summer vacation.

This marks the first time Tam Dao has been awarded the world’s leading town destination.

To get the award, Tam Dao overcame many town destinations in the US, Japan, the Czech Republic, Bosnia & Herzegovina, Nepal, and New Zealand.

The annual awards are based on votes cast by travel industry professionals and the public.

The World Travel Awards, launched in 1993, acknowledge excellence in the tourism industry, and have been described as the “travel industry’s equivalent of the Oscars
Source: vietnamplus.com