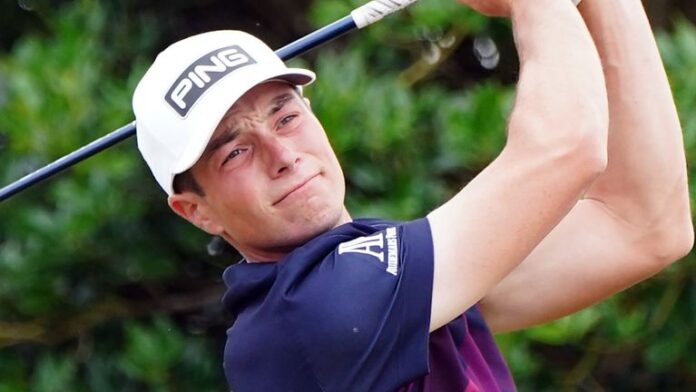 “It’s freaking nerve-racking. I was leading by five after the turn and didn’t play all that great on the back nine but it was good enough. It made it a little bit exciting I guess. To win his [Tiger Woods’] tournament is something very special.” – Hero World Challenge winner Hovland

Norway’s Viktor Hovland brilliantly held his nerve to see off a spirited challenge from Scottie Scheffler and successfully defend his Hero World Challenge title in the Bahamas.

Hovland was in danger of squandering a two-shot lead on the final hole when he pulled his second shot from an awkward lie on the edge of a bunker into the water, but the Ryder Cup star got up and down to salvage an unlikely bogey.

Scheffler also bogeyed the 18th after his chip from a waste bunker caught the edge of the hole and ran 15 feet past, leaving Hovland to celebrate an unexpectedly dramatic two-shot win on 16 under par.

“I was leading by five I think after the turn and didn’t play all that great on the back nine but it was good enough. It made it a little bit exciting I guess.”

Scheffler, who needed to win to reclaim top spot in the world rankings from Rory McIlroy, momentarily held a share of the lead when he followed birdies on the second and fourth by chipping in for eagle on the sixth.

However, playing partner Hovland holed from 20 feet on the same hole to edge back in front and Scheffler’s hopes looked to have disappeared with a bogey on the seventh and double bogey on the par-five ninth.

Scheffler refused to throw in the towel and the Masters champion birdied the 11th, 14th, 15th and 16th to keep the pressure on, pressure which almost paid off on the 18th.

Hovland joins tournament host Tiger Woods (2006-07) as the only player to win back-to-back titles in the limited-field event.

“That’s pretty bad-ass,” Hovland said with a smile. “I’m just happy he didn’t play the last two years. (But) to win his tournament is something very special.”

Woods was due to return to action at Albany for the first time since missing the cut in the Open Championship in July, but withdrew on Monday due to plantar fasciitis in his right foot.

The 15-time major winner also let slip in his Tuesday press conference that he had undergone “a couple of surgeries” this year as a result of competing again following a life-threatening car accident in February 2021, although he declined to reveal any details.

Woods still plans to partner Rory McIlroy in The Match against Jordan Spieth and Justin Thomas on December 10 and contest the PNC Championship with son Charlie the following week.