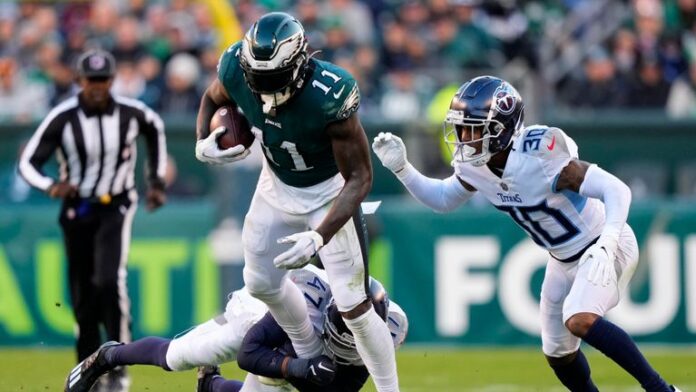 We’re on the home straight now of the 2022 regular season. The jockeying for playoff positioning is really coming alive – that was certainly evident after another weekend of crazy games, featuring some dominant performances.

1) Eagles show they’re the class of the NFC

Some teams have really laid down some markers this week, none more so than the Philadelphia Eagles, who I think look as complete a team as can be.

They had 363 rushing yards a week ago in beating the Green Bay Packers. This time out, in their 35-10 win over the Tennessee Titans, they had just 67 yards on the ground, but Jalen Hurts instead goes and throws for 380 yards and three touchdowns. Also, star receiver AJ Brown went out and dominated his former team, with two of those scores.

The defense also had six sacks of Titans QB Ryan Tannehill. It was a reminder that this Eagles team can win any way they want; they look like the class of the NFC.

2) Cowboys following in closely behind Philly

Not far behind the Eagles in the NFC are the Dallas Cowboys.

They’ve won five of their last six, with their latest being a 54-19 absolute beat-down of the Indianapolis Colts on Sunday night. And, much like the Eagles, they’re capable of beating you in a multitude of ways.

In this game, they had 220 rushing yards and four touchdowns; Dak Prescott threw for three TDs; the defense had three sacks and three interceptions.

Sign me up for Eagles @ Cowboys on Christmas Eve this year.

The Cincinnati Bengals’ 27-24 win over the Kansas City Chiefs was a game that reminded me we have to put Joe Burrow in the conversation as one of the top quarterbacks in the NFL.

Earlier this season, we got so excited by the Patrick Mahomes versus Josh Allen rivalry, pondering where it was going to go in the coming years, that Burrow was somewhat overlooked.

This win served as his reminder. The throw he made over the middle to Tee Higgins to end the game was so impressive. Burrow has ice running through his veins and he is just a tremendous lead for this team.

The Bengals have now won four in a row, with a variety of other players also stepping up – Ja’Marr Chase had 97 receiving yards, Samaje Perine had over 100 yards rushing and the offensive line, for the second week in a row, allowed only one sack.

Cincinnati are finding form at exactly the right time, just as they did last year.

The Detroit Lions are one of the really positive stories from this season.

It’s strange to say this, but the Lions topped 30 points for the sixth time in 12 games with their 40-14 hammering of the Jacksonville Jaguars on Sunday – serving as a sign that the Lions are further along in their building of a brighter future than the Jags are, when you compare the two teams with the top two draft picks this year.

They’ve surrounded Jared Goff with weapons, and so he looks a completely different quarterback to the one we saw struggling last season.

The Lions are feisty, fun to watch and not quite dead yet in the NFC playoff race.

Just how good was the San Francisco 49ers defense in their win over the Miami Dolphins at the weekend?

Miami scored on the very first play of the game, a 75-yard touchdown pass from Tua Tagovailoa to Trent Sherfield, but the Niners didn’t blink – even when their quarterback Jimmy Garoppolo left the contest with a broken foot.

Their defense powered them to victory. They had three interceptions, scored on a fumble return, Nick Bosa had three sacks.

The Dolphins are too good on offense to be shut down completely, but their moments were only fleeting, and it was the Niners defense that ultimately proved to be the star of this show.

Even with Garoppolo lost for the year, the strength of that defense, and given the offensive talent that surrounds him, they can still stay on track even with rookie Brock Purdy at QB.

Player of the Week: Nick Bosa

I’m staying with the 49ers for player of the week. Bosa was the driving force behind that win over the Dolphins.

Tua had no time to pass for much of the day, with Bosa as good as advertised. Along with his three sacks, he had four quarterback hurries and one forced fumble as he reminded us that he’s one of the very best defensive players in the NFL on the best defense in the league.

Play of the Week: AJ Brown’s second TD for Eagles

Brown was clearly motivated to have a big day against the team that traded him away on the opening night of the draft earlier this year.

He was completely covered down the left sideline on this play, but it didn’t matter – he just outmuscled the Titans defender and simply refused to be beaten to the football.

It was a real exclamation point on what was an amazing day for him and the Eagles.

Coach of the Week: Mike McCarthy

I want to give Cowboys defensive coordinator Dan Quinn an honourable mention, but Mike McCarthy just edges him out this week.

With the Cowboys, we tend to look at so many people other than the head coach, but if you’re leading a team that puts up 54 points, winning five of your last six, then you’re doing something right.

There’s a negative view of McCarthy at times, but he has Dallas rolling and heading in the right direction. This team are bang in form at the right time of the year.

On My Radar: Derrick Henry

It’s really worrying now what we’re seeing out of the Titans lead running back.

Coming into Sunday’s game, he was averaging 2.8 yards per rush over the previous three weeks, and against the Eagles he didn’t get going at all.

Tennessee are so bogged down on the offensive side of the ball because Henry can’t get going, and no one fears Ryan Tannehill and the passing game.

The iPhone 15 Ultra might be Apple’s biggest and priciest iPhone...