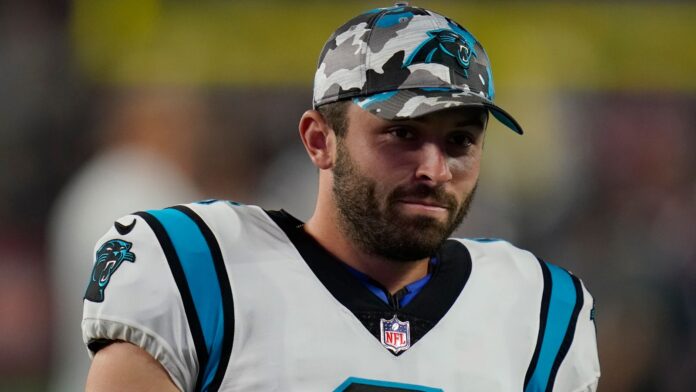 Defending Super Bowl champions Los Angeles Rams claim quarterback Baker Mayfield off waivers, one day after his release by the Carolina Panthers; Mayfield had only been with the Panthers for five months before his exit

Former No 1 draft pick Baker Mayfield is getting another chance to save his career, this time with the defending Super Bowl champions LA Rams.

The Rams claimed Mayfield off waivers on Tuesday, a day after the Carolina Panthers cut ties with the beleaguered quarterback after just five months.

The Rams (3-9) lost their sixth straight game on Sunday to the Seattle Seahawks, with John Wolford starting under center. Matthew Stafford, who had been diagnosed with a concussion and neck injury a few weeks prior, was revealed after the game to have a spinal contusion that likely ended his season.

The Rams had Wolford and Bryce Perkins as the other quarterbacks on their roster, though Wolford is dealing with a neck injury and was listed as did not participate on Monday’s estimated practice report.

Though their chances of making a late run for a wild-card berth are close to zero, the Rams claimed the 27-year-old Mayfield for the closing stretch and inherited the $1.35m left on his contract.

The Rams’ move also potentially blocked a quarterback-needy NFC West rival, the division-leading San Francisco 49ers, from being able to claim Mayfield because the Rams were ahead of the 49ers in the waiver order.

The 49ers have lost quarterbacks Trey Lance and Jimmy Garoppolo to injuries – though reports came out on Tuesday that Garoppolo will not need foot surgery as originally expected and could be back for the playoffs.

ESPN reported that the 49ers did not put in a claim for Mayfield. Mayfield started six of the seven games he played in this season, completing 57.8 per cent of his passes for 1,313 yards and six touchdowns against six interceptions.

He was in his first season in Carolina, which acquired him from the Cleveland Browns in July for a 2024 conditional fifth-round pick. The pick will remain a fifth-rounder since Mayfield didn’t play 70 percent of the team’s snaps at QB.

The Panthers paid $5m of Mayfield’s fifth-year option while the Browns paid about $10.5m. Mayfield agreed to cut the remaining $3m-plus off his fifth-year salary to facilitate the trade.

Mayfield is 30-35 as a starting QB in 65 starts as an NFL quarterback since being selected No 1 by the Browns in 2018. He’s thrown for 98 TDs and 62 interceptions for his career.

ESPN reported that Mayfield is en route to Los Angeles and could play as soon as Thursday, when the Rams visit the Las Vegas Raiders.