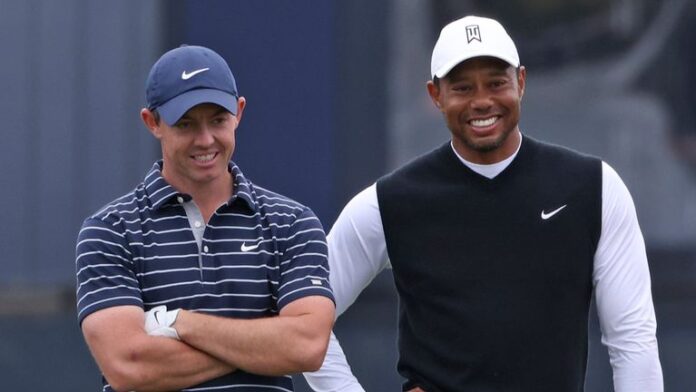 Tiger Woods has not played competitive golf since July and missed the Hero World Challenge last week with a foot injury; former world No 1 to use a cart when he plays alongside Rory McIlroy against Justin Thomas and Jordan Spieth in The Match

Tiger Woods is ready to defy a foot injury and return to action alongside Rory McIlroy in The Match on Saturday.

The former world No 1 has not played competitive golf since July and missed the Hero World Challenge event in the Bahamas last week because of an injured right foot.

However, he will be aided by the use of a cart when he teams up with Rory McIlroy to compete against Justin Thomas and Jordan Spieth in the 12-hole competition at Pelican Golf Club in Belleair, Florida.

The event will use a best-ball format, with the best individual score winning each hole.

“I can hit golf balls. It’s just hard getting from point A to point B, so [the cart] will certainly help a lot,” said Woods, who is still struggling with plantar fasciitis in the foot – tissue inflation that causes pain in the heel.

“Being in a cart is a totally different deal. That’s something I’ve done at home quite a bit. When I was trying to gear up and be able to play in the Hero and see if I could actually do it, the walking part was the challenge, it wasn’t actually swinging.

“I’ve got to get this plantar to heal and that just takes time. It’s not something that happens overnight. It’s going to take a lot of rest and healing and unfortunately, treatment. It’s a tough road.”

The last time the public saw Woods, who suffered significant injuries to his right leg and foot during a February 2021 car crash, play was at The Open at St Andrews, where he missed the cut.

He has played in two other events in 2022, placing 47th at the Masters and withdrawing from the PGA Championship after the third round.

Spieth, meanwhile, is looking forward to locking horns with Woods and McIlroy.

“If you told myself and JT in 2012 in college that we would be playing against these two in a match, that would be a really, really cool thing,” he said.

Ancer ahead as LIV golfers start strongly at Saudi International

This short film about time travel was shot entirely on an...

Citizen’s New ‘Ecozilla’ Watches Are the Kinds of Monsters We Can...

How do you lose a radioactive capsule? Australian investigators are wondering...

Death of teen who went missing for 100 days not suspicious,...

‘Your pain is my pain’: Pope urges young people to forge...