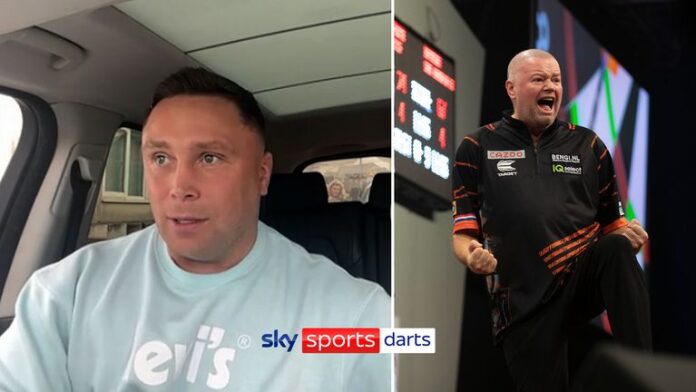 Gerwyn Price says he is relishing a potential rematch with Raymond van Barneveld having suffered a string of defeats to the rejuvenated Dutchman this year; watch the 2023 PDC World Darts Championship – live on Sky Sports – from December 15

World No 1 Gerwyn Price and five-time world champion Raymond van Barneveld are on a collision course at Alexandra Palace and ‘The Iceman’ says he is “ready” to finally beat the Dutch legend.

Van Barneveld claimed two stunning victories over Price at the Grand Slam of Darts which catapulted him into the world’s top 32 for the first time since March 2019.

The Dutch veteran could be in line to face ‘The Iceman’ in the third round should both players successfully come through their second-round matches.

And the head-to-head record does not bode well for Price, who has recorded just one win from their eight meetings in total. The world No 1 has lost all three of their clashes this year, including those two classic encounters in Wolverhampton.

Spotify Due to your consent preferences, you’re not able to view this Privacy Options

Speaking to the latest Love The Darts Podcast, Price said: “In the Grand Slam I was pretty steady but a lot of players were playing well against me, especially Raymond in the two games.

“I don’t think he beat me. I bombed the two games because I missed chances. I failed to win seven legs on the bounce, which isn’t my game.

Price added: “Once the exhibitions are done and dusted I’ll have a week off preparing on my own and I might even go and see my old mate Barrie Bates to have a bit of practice, which I normally do before the Worlds for a bit of the set format play.

With Michael van Gerwen dominating darts in 2022, Price admits ‘The Green Machine’ will be the one to beat at this year’s tournament.

Price said: “He is the top form player but you also have Michael Smith, who won the Grand Slam, and don’t underestimate anybody in the tournament because as soon as you do, you’re packing your things.

“But Michael is the favourite and the front-runner at the minute.”

Michael Bridge and Mark Webster believe Van Gerwen will want to end a remarkable campaign on top of the world with victory at the Worlds.

“My tip is either him or Michael Smith,” said Bridgey. “Michael’s performance in the Players Championship final against Rob Cross was outstanding. He’s pretty much the Michael of old and he’s talking as if it’s the Michael of old.

“I do make him favourite and he should be confident.”

The only other year when Van Gerwen won the Premier League, the Matchplay, the World Grand Prix and the Players Championship Finals, he went on to win the World Championship and Webster admits he is the red-hot favourite to finally lift a fourth crown at Alexandra Palace.

“Why shouldn’t he be favourite? He’s just found the right things at the right time. At the World Matchplay he wasn’t at his best for the first couple of rounds but when it got to the nitty gritty he found those extra gears,” said former Lakeside champion Webster.

“He’s not going to catch Phil Taylor, but Raymond van Barneveld has got five and I think he’d like to eclipse that and become the top man in Holland. He’ll be there at the business end.”

Taylor: Euros star Kelly back to her best and reaping rewards...

Spot the Sussexes: Is that Harry and Meghan at Ellen DeGeneres’s...