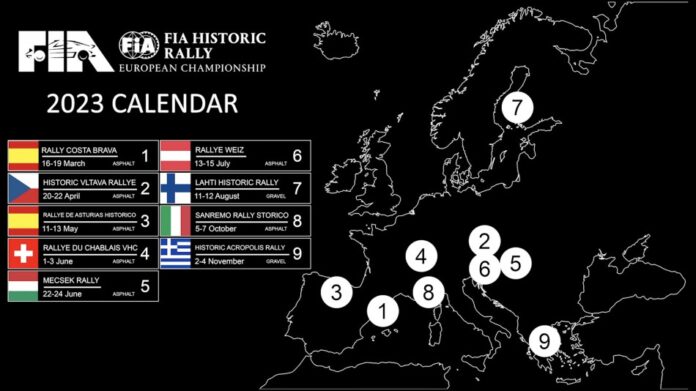 The 2023 calendar for the FIA European Historic Rally Championship was approved by the FIA World Motor Sport Council in Bologna.  The championship calendar will feature nine rounds, with Greece joining the championship with the Historic Acropolis Rally in November, adding a second gravel event to the schedule for the first time.

The season will start in Spain with the 71st Rally Costa Brava based in Girona on the 16-19 March.  The Historic Vltava Rally in the Czech Republic will host round 2 in April before the competitors head back to Spain for the Rally de Asturias Historico in May.

The Rallye du Chablais in Switzerland will host round 4 at the start of June, with the Mecsek Rally in Hungary following three weeks later.

The Championship moves to Austria for the Rally Weiz on the 13-15 July, with the Lahti Historic Rally in Finland in August, the first of the two gravel events.  The penultimate event will be the Sanremo Rally Storico in October, with the new event for 2023, the Historic Acropolis Rally, being held on the 2-4 November to conclude what promises to be an exciting season of rallying.

John Naylor, President of the FIA Historic Motor Sport Commission, said: “After an extremely successful season in 2022, the calendar for 2023 looks to build on those successes to further improve the events for the competitors and the organisers.  On behalf of the FIA I would like to thank everyone that took part in the 2022 season.

“While the championship will provide stability by visiting eight of the events that were on the calendar in 2022, the inclusion of the Acropolis Historic Rally adds another exciting dimension.  It brings a second gravel event to the schedule, and we are pleased to include another famous name from the golden era of rallying on the FIA European Historic Rally Championship calendar.

“We are looking forward to an even bigger and action-packed season in 2023, we hope you will join us.”