Home Culture ‘I’ve always been a hugger’: Meghan on meeting the Queen, Kate and... 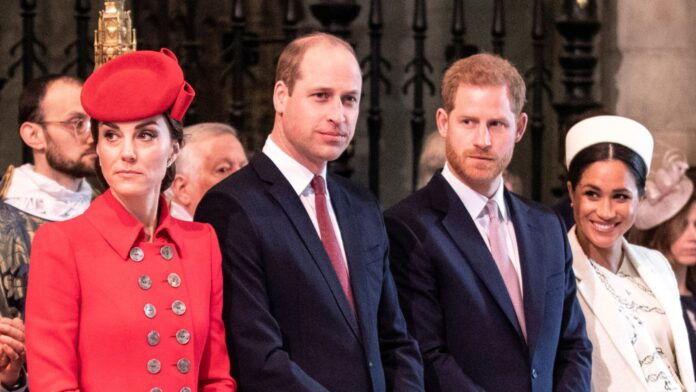 The Duchess of Sussex has revealed details of her first meetings with the Queen, as well as William and Kate, in her new documentary series.

While much of the first three episodes of the highly anticipated Harry and Meghan series saw the couple discussing the “feeding frenzy” of the media surrounding their relationship, they also shared the story of how their romance began – and what it is like meeting your in-laws when they are royalty.

Speaking about meeting Prince William and Kate for the first time, Meghan said they “came over for dinner” and she was barefoot and wearing ripped jeans.

“I was a hugger,” she said. “I’ve always been a hugger, I didn’t realise that that is really jarring for a lot of Brits.

“I guess I started to understand very quickly that the formality on the outside carried through on the inside.

“There is a forward-facing way of being, and then you close the door and go, ‘You can relax now’, but that formality carries over on both sides. And that was surprising to me.”

Before that dinner, the Queen was the first senior member of the Royal Family introduced to Meghan – who only discovered she was meeting the monarch on the journey there.

“She had no idea what it all consisted of so it was all a bit of a shock for her,” said Harry.

“There wasn’t like some big moment of, now you’re going to meet my grandmother,” Meghan said. “I didn’t know I was going to meet her until moments before.

Meghan added: “Now I’m starting to realise, this is a big deal. I mean, Americans will understand this… We have medieval times, dinner and tournament. It was like that.”

‘The actress thing was the biggest problem’

Harry said his family were “impressed” by Meghan but that her being an American actress “clouded” their view.

“I remember my family first meeting her and being incredibly impressed, some of them didn’t quite know what to do with themselves,” he said. “Because I think they were surprised. They were surprised that a ginger could land such a beautiful woman and such an intelligent woman.

Meghan added: “The actress thing was the biggest problem, funnily enough. There is a big idea of what that looks like from the UK standpoint – Hollywood – and it’s just very easy for them to typecast that.”

Harry on ‘the race element’

Netflix launched its first three episodes of the couple’s six-part series on Thursday morning, with the following three set to be released on 15 December.

Three months on from the death of the Queen, the series comes after the couple’s bombshell interview with Oprah Winfrey in 2021, in which Meghan said there were “concerns” raised about their son Archie’s skin colour before he was born, and that she contemplated suicide during her time in the Royal Family.