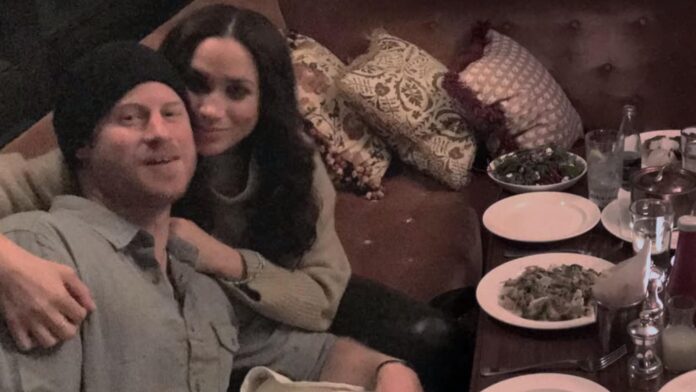 The Duke and Duchess of Sussex’s Netflix docuseries, titled Harry and Meghan, has dropped in part today – unveiling dramatic revelations about their time in the UK.

Here, Sky News highlights the key admissions made by Harry and Meghan, along with a few more surprises.

Harry and Meghan both appear candid from the off and ready to tell their version of events following their 2016 whirlwind romance.

After completing their final stint of royal engagements in March 2020, the 38-year-old prince says it is “really hard to look back on it now and go ‘what on earth happened’? Like, how did we end up here?'”

Women in the Royal Family

Prince Harry spoke about women in the Royal Family and said he had learnt “the pain and suffering of women marrying into this institution”.

He said: “I remember thinking how can I ever find someone who is willing and capable to be able to withstand all the baggage that comes with being with me.”

Prince Harry says his mother, Princess Diana, was “harassed throughout her life”.

He says: “My mum was harassed throughout her life with my dad, but after they separated, the harassment went to new levels.”

Harry goes on to say that the moment his mother divorced, she was “by herself”.

Meghan reveals she wasn’t looking for a relationship the summer they met.

“I was really intent on being single, and just having fun all the time,” she says. “I had my career, I had my life, I had my path, uh, and then came H – I mean talk about plot twist.”

Then Harry reveals how they actually met…

“I was just scrolling through my feed and someone who was a friend had this video of the two of them, like a Snapchat, with dog ears. That was the first thing – I was like ‘who is THAT?'”.

The couple’s son, Archie, is heard speaking on TV for the first time six minutes into the episode.

As Meghan looks at the sunset, she asks Archie how he would describe it.

Harry reveals there was an urge for members of the Royal Family to marry someone who “fit the mould”.

He says: “I think for so many people in the family, especially the men, there could be a temptation or an urge to marry someone who would fit the mould as opposed to someone you are destined to be with.

“The difference between making a decision with your head or your heart.

“And my mum certainly made most of her decisions, if not all of them, from her heart. And I am my mother’s son.”

How different Prince William and Harry were as children is explored in the first episode, and how the Royal Family reacted to the paparazzi.

Harry describes his childhood as “filled with happiness and laughter”, but added that “the majority of my memories are of being swarmed by paparazzi”.

He also describes how the Royal Family reacted to paparazzi: “Rarely did we have a holiday without someone with a camera jumping out of a bush or something. Within the family, within the system, the advice that’s always given is don’t react.

“Don’t feed into it. There was always public pressure, with its fair share of drama, stress and tears. And witnessing those tears. I could always see it on my mum’s face. And that was when I thought hang on what am I, who am I, what am I part of?”

Speaking about Meghan, Harry says: “So much of how Meghan is, and how she is, is so similar to my mum.

He adds that he accepts “there will be people around the world who fundamentally disagree with what I’ve done and how I’ve done it, but I knew that I had to do everything I could to protect my family”.

“Especially after what happened to my mum. You know I didn’t want history to repeat itself,” he says.

Meghan reveals in episode 2 that the beginning of her relationship with Harry was “long distance” and “guarded”.

She says: “Everything was just texts and FaceTimes and we’d just talk for hours and it just felt exciting which is so weird because it wasn’t exciting in the way that people would assume that it would be.”

The former Suits actress describes the start of their romance as “relaxed and easy”.

Speaking about the relationship, Harry says: “I got to know her more and more, I was like, ‘I’m really falling in love with this girl’. So in spite of my fear, I just opened my heart to see what’s going to happen.”

Meghan said she found the Royal Family quite formal upon first meeting them, and revealed she first met Prince William and Kate while wearing a ripped pair of jeans.

She says she has always been a hugger and didn’t realise that was jarring for a lot of British people.

“I guess I started to understand very quickly that the formality on the outside carried through on the inside,” Meghan says.

“That there is a forward-facing way of being and then you close the door and ‘phew I can relax now’ but that formality carries over on both sides. And that was surprising to me.”

Prince Harry says the Queen was the first senior member of the Royal Family who Meghan met.

Prince Harry describes the early stages of his relationship as a “combination of car chases, anti-surveillance driving and disguises”.

Meghan describes how she received a death threat while she was in Toronto after the huge surge of media attention she experienced.

She said when she got her first death threat “things changed because I needed to have security”.

Harry revealed that members of the Royal Family questioned why the Duchess of Sussex should be “protected” when the couple raised newspaper headlines about her.

“The direction from the Palace was don’t say anything,” he says, adding that his family would ask why Meghan should receive “special treatment”.

“I said: ‘The difference here is the race element’.”

In episode two, Meghan says she did not know what meeting the Queen would consist of and describes it as “all a bit of a shock”.

The Duchess of Sussex says: “I didn’t realise I was about to meet Queen, on way to a lunch and Harry asked, ‘You know how to curtsey right?'”

She goes on to say: “Now I’m realising this is a big deal, talks about curtseying and meeting the Queen, it was so intense.”

Speaking about introducing Meghan to his family, Harry says: “I remember my family first meeting her and being incredibly impressed, some of them didn’t know quite what to do with themselves.

But he says his family’s judgement may have been clouded by the fact Meghan was an American actress, and thought, “this won’t last”.

In the third episode, Meghan describes her engagement interview as “an orchestrated reality show”.

She said: “It was, you know, rehearsed, so we did the thing out with the press and then we went right inside, took the coat off, sat down and did the interview. So it was all in that same moment.”

The couple announced their engagement in 2017.

Meghan explains in episode three that she “rarely wore colour” during her time in the UK as she understood you could not wear the same colour as the Queen in a group event.

“But then you also should never be wearing the same colour as one of the other more senior members of the family. So I was like ‘well, what’s a colour that they’ll probably never wear?'”, she says.

“Camel, beige, white. So I wore a lot of muted tones, but it also was so I could just blend in.

“Like, I’m not trying to stand out here. So there’s no version of me joining this family and trying to not do everything I could to fit in. I don’t want to embarrass the family.”

The Duke of Sussex reveals in episode three there is a “huge level of unconscious bias” in the Royal Family, before the documentary refers to when Princess Michael of Kent wore a Blackamoor-style brooch to an event the Duchess of Sussex attended in 2017.

He says: “In this family, sometimes you are part of the problem rather than part of the solution. There is a huge level of unconscious bias.

“The thing with unconscious bias, it is actually no one’s fault. But once it has been pointed out, or identified within yourself you then need to make it right.

“It is education. It is awareness. It is a constant work in progress for everybody, including me.”

Harry says wearing a Nazi uniform to a private party was “one of the biggest mistakes of my life” and that he felt “so ashamed afterwards”.

In 2005, Harry made headlines when he was pictured wearing a Nazi uniform with a swastika armband to a fancy dress party.

The pictures was published on the front page of The Sun newspaper under the headline: “Harry the Nazi”.

Clarence House later issued a statement which read: “Prince Harry has apologised for any offence or embarrassment he has caused. He realises it was a poor choice of costume.”

Meghan opens up about her experience joining the Royal Family, the protocols and how she came to learn the British national anthem.

She says: “Joining this family, I knew that there was a protocol for how things were done. And do you remember that old movie The Princess Diaries, with Anne Hathaway?

“There’s no class, and some person who goes ‘sit like this, cross your legs like this, use your fork, don’t do this, curtsey then, wear this kind of hat’. It doesn’t happen”.