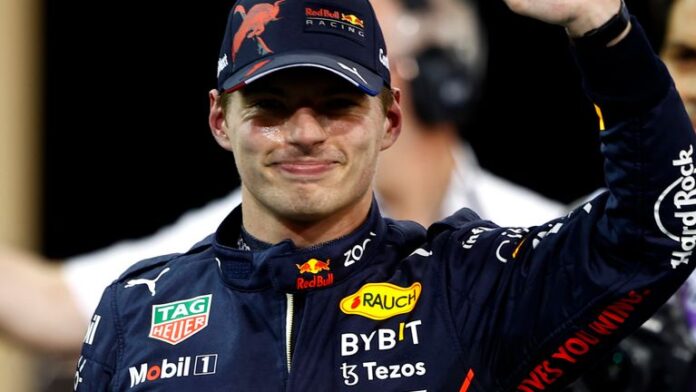 “This year has been very different. I think we were more competitive this year, and more enjoyable with how we performed as a whole team. I would say this one is better and more rewarding” – Verstappen; Charles Leclerc expects “smooth” Ferrari transition post-Mattia Binotto

Max Verstappen has been formally crowned a double Formula 1 world champion after receiving his 2022 trophy at the FIA’s prize-giving ceremony, with the Dutchman saying his record-breaking year was ‘better’ than 2021.

Verstappen collected his second successive trophy in Bologna on Friday night, nearly three weeks after his 15th win of the year.

No driver had ever won more than 13 in a single season before Verstappen’s feat at Red Bull, who aced the new F1 regulations with their car.

Despite a dramatic and controversial finish to the 2021 season which delivered Verstappen’s maiden win, the 25-year-old admitted this year was more enjoyable.

“The emotions are very different, but I think they should be anyway, because your whole life you aim for one particular goal, and that’s to become a world champion for me in F1, so the first one is always an emotional one once you achieve it.

“But this year has been very different. I do think we were more competitive this year, and more enjoyable with how we performed as a whole team.

“We won the Drivers, and the Constructors, we had a lot of victories as a team, so I would say this one is better and more rewarding.

“But the first one will always be more emotional.

“As a driver you learn from every single year, you get more experience and you look at what you can do better.

“And you know that when you have to fight for a title, you have to score points basically every race, as much as you can.

“That’s why, of course, at the beginning of the year it was very tough to have those DNF’s, but I knew from that point onwards, I couldn’t afford any mistakes from my side in case we would have a retirement for whatever reason.

“So you always try to be as clean as you can be and try to be as perfect as you can every single weekend. It’s what I try to demand from myself every time I jump into the car.”

This year marked the first time Lewis Hamilton had not been in the top three since his maiden Mercedes season in 2013, although the Englishman did not attend last year’s gala after the controversial finish to 2021’s title fight.

There was nothing contentious, though, about Verstappen’s triumph this year.

Despite a rocky start to the season with two retirements in the first three rounds, Verstappen chased down and overhauled early leader Leclerc before the summer break, and won nine of the season’s last 11 races to clinch his championship, and an F1 record, in style.

“After Bahrain [the season’s opening race]… no maybe not!” Verstappen said humorously, in response to when he thought he had the title won.

“When we put the car on the track in winter testing, we could see it was a competitive car, but it was a little bit overweight.

“But the way we bounced back after a tough weekend in Australia, to then go to Imola and the weekend we had was just incredible, I knew that there was a lot of potential but also at that point that we had a lot of ground to catch up on.

“But the car, since then, has been continually developed in the right way, and slowly the car has got skinnier as well, which was good. We’ve had a lot of incredible weekends as a team.

“Spa [Belgian Grand Prix, is the race that stood out]. Just because of the weekend we had.

“We put the car on the track and everything was working perfectly, I barely touched the car and we were miles ahead of the others.”

Mattia Binotto’s departure as Ferrari Formula One boss at the end of the month is unlikely to affect the team’s performance on track next season, championship runner-up Charles Leclerc said on Friday.

Binotto announced his resignation in November, with the sport’s oldest and most successful team yet to confirm a replacement.

“I’ve never had a team principal change during when I was racing for the same team,” Leclerc, who debuted at Ferrari-powered Sauber in 2018.

“It will probably require a little bit of time for the [new] team principal to get at ease with the system and Ferrari, because it’s obviously a huge team.

“But I believe that if it’s done the right way I don’t think we’ll suffer any of it on the track. I’m pretty sure it will be a smooth transition.”

Leclerc said Binotto had called him before his announcement and he respected the decision.

“I can only thank him. He has believed in me right from the start, he extended me with a very, very long contract and before being team principal he was also inside the scuderia [team] for many, many years,” he said.

“He has contributed to the success the team had in past years so I wish him the best and now it’s up to us to focus on the future and try to take the right choices to be a bit more of a challenge to Red Bull next year.”

Protesters use climbing equipment to board ship and scale nearly 400-foot...