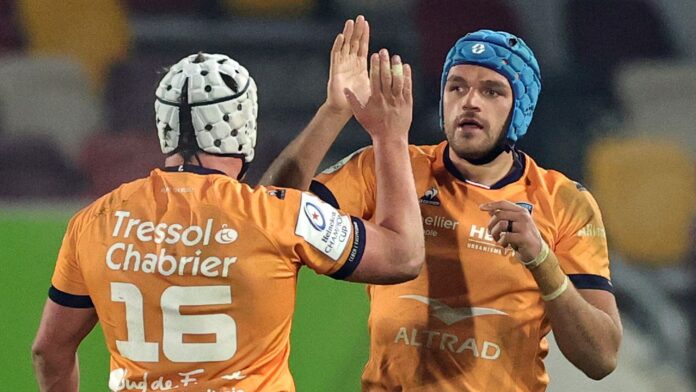 The dismissal of hooker Agustin Creevy cost London Irish as they suffered a 32-27 defeat to Montpellier in their Heineken Champions Cup opener in Brentford.

Irish looked firmly in control when they led 24-6 in the 34th minute, but the Argentinian’s red card turned the game.

The hosts fought bravely, but the handicap proved too much as Montpellier scored four tries.

A powerful burst from Benhard Janse van Rensburg created the first score. The Irish centre’s run put the visitors’ defence on the back foot and, when they were penalised, Jackson knocked over the resulting kick.

However, straight from the restart it was Irish’s turn to infringe, but Carbonel sent his straightforward kick wide.

Carbonel was soon presented with another opportunity and this time made no mistake to leave the scores level after an evenly-contested but largely featureless first quarter.

An error from Jackson, who kicked the ball into touch in goal, gave the French field position and, when Irish conceded a scrum penalty, Carbonel was again on target.

Irish had the next chance for points but turned down a kick at goal in favour of more attacking options. They built up a head of steam to put Montpellier under pressure, with French prop Enzo Forletta yellow-carded for a deliberate offside.

The hosts immediately capitalised when flanker Gonzalez forced his way over from close range before a superb 45-metre run from Ollie Hassell-Collins created another for Cinti.

Creevy had played a key part in that score with a neat offload for the scoring pass, but moments later he was sent off for a high tackle on Montpellier full-back Anthony Bouthier.

Bouthier left the field for a head injury assessment and French problems continued when Ben Loader raced past some weak tackling to send Gonzalez in for his second.

The visitors badly needed a response before half-time and they got one when Reinach darted over from a close-range maul, with Carbonel’s conversion leaving his side 24-13 adrift at the interval.

Bouthier returned for the restart and it was his run which was the catalyst for his side’s second try.

The full-back made 15 metres before quick handling from the French backs saw Darmon cross in the corner.

Irish lost the impressive Gonzalez to a head assessment as they struggled to stem the tide. Zach Mercer was becoming increasingly influential for the visitors and a couple of telling bursts set up a try from Becognee.

The hosts were now struggling to cope and it came as no surprise when Darmon outflanked the cover for a bonus-point try.

Irish were given a glimmer of hope when Montpellier replacement Leo Coly was sin-binned, but they could only manage a last-minute penalty from Jennings to give them a well-deserved bonus point.

Challenge Cup: Bristol too strong for Perpignan; Stade Francais hit back from behind to beat Benetton

Bristol produced a blistering first-half performance to get their European Challenge Cup campaign under way with a 19-5 win in Perpignan.

Early tries from Charles Piutau and Fitz Harding, both converted by AJ MacGinty, gave the Gallagher Premiership side a commanding 14-0 advantage.

And when 19-year-old Joe Jenkins crossed on his European debut after gathering a Harding kick out wide, Bristol looked set for a comfortable night in the south of France.

But Eru Shahn crossed for Perpignan on the stroke of half-time after a clever line-out and the home side largely dominated what proved to be a pointless second period.

Stade Francais hit back from behind to beat Benetton 24-14 and make a successful start at Stade Jean-Bouin.

Benetton led 14-10 on the hour mark after Siua Maile went over for their first try, but Jeremy Ward put the hosts back in front within two minutes, and a further try from Lester Etien sealed their win.