Home Culture Backstage with… Damian Lewis and the cast of new ITVX thriller A... 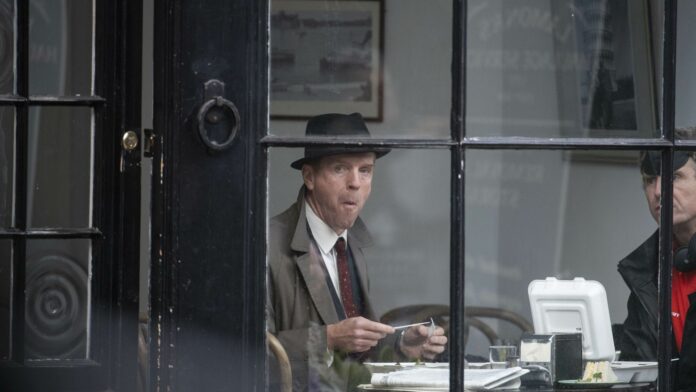 Which giant of British film and television do you call when you want to launch a brand-new streaming service in the UK?

Why Emmy and Golden Globe winner Damian Lewis, of course, who leads the cast of the new thriller A Spy Among Friends, which has debuted on ITVX this week.

The show, written by former Scots Guard Alex Cary, is based on the book of the same name, and sees Lewis play Nicholas Elliot, an MI5 agent in the 1960s, who learns his friend and colleague Kim Philby (played by Guy Pearce) has defected to the KGB.

Telling Backstage, the TV and film podcast from Sky News, about just why he took the role on, he said it all stemmed from the book.

“Kim Philby is very well known in this country, a well-known traitor, part of that famous Cambridge spy group of KGB operatives – and Nicholas Elliott was unknown, but his best friend.

“We wanted to sort of get… behind the facade of a very well-known character, Kim Philby, and really examine his friendships and more intimate moments with his great friend Nicholas Elliott and how Elliott facilitated his successful spying for 30 years.

“So it’s really the finer nuances of friendship and betrayal that I was interested in exploring.”

Lewis added that the real life characters are “revered”, telling Backstage: “Here’s a man who just got away with it for so long. So how did he do it? How did they miss it for 30 years?

“Well, that’s the prism through which we’ve tried to tell this story. How did Nicholas Elliott miss it? His best friend and everyone else.

“By the end of the six hours we see a man is drowning in vodka and unhappy with being in Russia, being in Moscow. He never wanted to go and live there… he enjoyed the secrecy, enjoyed the elitism of his job.

“And in the end he was a mass murderer, simply through his treachery.”

Anna Maxwell Martin also stars in the show, as Lily Thomas, another MI5 spy, whose northern accent sets her apart from her colleagues.

“Was that Welsh?” director Nick Murphy teased Maxwell Martin, to which she replied: “I don’t know, it veered all around the country.”

Maxwell Martin, who is best known for her roles in Line Of Duty and Motherland, added: “I just want to do things that are different all the time and not feel I’m doing the same thing. And it really was a complete departure from everything else.”

Do the stars and creatives reckon they could be spies after their stint on the show?

Maxwell Martin’s response, however, was “not for me”.

Writer Cary adds: “As a writer, I suppose that I’m a fantasist of some description, so, yeah, certainly.

“I mean, listen, the cool thing about being a spy is, you know s*** that nobody else knows, and you feel better than them.”

However, it was Lewis who perhaps summed it up best: “Fun – it seems sort of thrilling.”

A Spy Among Friends is now streaming on ITVX – hear our review in this week’s Backstage podcast.