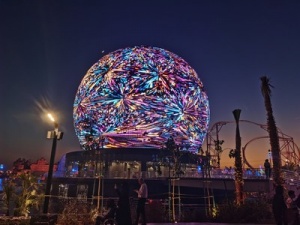 In Riyadh, the capital of Saudi Arabia, Chinese elements have long been penetrated into people’s lives and national development.
Among all the Chinese elements, Boulevard World Cultural Travel Project initiated in Riyadh on November 21 became a new entertainment landmark in Saudi Arabia. The project built by the Chinese LED enterprise Unilumin adopted nearly 15,000 square meters of various LED displays, including a giant spherical screen with a diameter of 35 meters (breaking the Guinness World record), successfully created a Metasight city on the desert, and once again impressed the world with China’s high technology.

It is known that the construction of Boulevard World Cultural and Tourism Project is extremely difficult, especially the spherical screen with the height of 30 meter and diameter of 35 meters. Its steel structure alone weighs 400 tons. Also, the process is complicated and requires high altitude operation. In order to ensure the smooth completion and delivery of the Project, Unilumin recruited a large number of professionals from all over the world to build a team, with nearly 200 people in the peak period. With the full support from the whole Company, it only took five months to complete the whole process from business contact, solution confirmation to installation, commissioning and lighting of the screen.

At present, Boulevard World Project has been officially launched, with thousands of visitors.

How do you lose a radioactive capsule? Australian investigators are wondering too

Death of teen who went missing for 100 days not suspicious, Chinese police say

This short film about time travel was shot entirely on an...

Citizen’s New ‘Ecozilla’ Watches Are the Kinds of Monsters We Can...