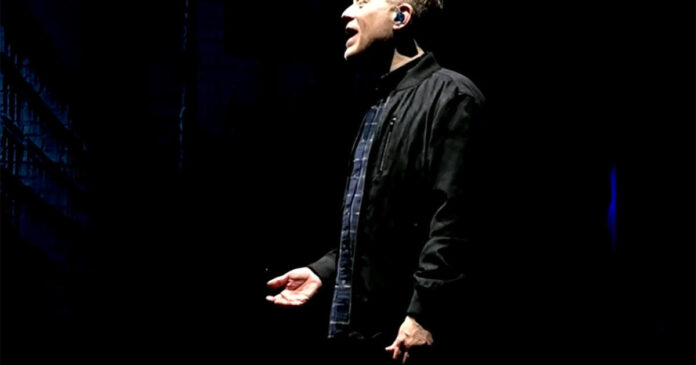 Life has come full circle for Anthony Rapp, as he works out the kinks in his one-man show, “Without You,” before opening night. It’s his most personal work, looking back on the loss of both his mother and his friend, Jonathan Larson, the man behind the musical “Rent.”

His new show, which is based on Rapp’s New York Times bestselling memoir of the same name, opens Jan. 25 at New World Stages in New York City.

Rapp said he liked the intimacy of the Off-Broadway auditorium.

“I like that a lot,” he said. “I’m telling the story to people, so it’s still nice for me to be able to feel their presence.”

Rapp’s career is like a buffet – something for everyone, with a resume that includes the Paramount+ series “Star Trek: Discovery” (“I am such a nerd and fan that I never pictured myself in it,” he said) and cult classic films, like “Dazed and Confused,” which he called “my favorite film I’ve ever done.”

“If you had said beforehand, ‘Oh, yeah, a rock opera about a group of friends in the East Village with a drag queen and interracial gay relationships, and, you know, that’s going to be a huge success,’ no one – you would have been laughed out of the room!” he said.

Rapp said all the projects have something in common.

“Truth” is what led him to come out as gay as a young man, even if that meant some difficult moments.

Rapp said he was very close to his mom as a child.

“As a young adult, we had a little bit of distance around when I came out. Like, it wasn’t bad, but it wasn’t sewn up in a bow,” he said.

As his career started to take off, “she was really proud and excited,” Rapp said, “and then there were moments, because I was starting to do some really dark and interesting and weird things, and she’s like, ‘Why can’t you just play someone normal?'”

When Rapp landed the role of Mark Cohen in the musical “Rent,” first on stage, and later in the movie, his career hit a high note. The smash show was considered groundbreaking.

Playwright Jonathan Larson and Rapp grew close as the show ran through workshops and rehearsals. Tragically, Larson died the day before “Rent” made its debut Off-Broadway.

“The fact that he wasn’t there just tilted everything in this really strange way, but it also made us collectively that much more committed to it,” Rapp said. “From Jan. 24, which was the dress rehearsal, until July, no one missed a performance. That never happens on any show, let alone a show as demanding as ‘Rent.'”

Right around the time “Rent” moved to Broadway, Rapp’s mom had begun her losing battle with cancer.

“It was likely to be the last thing she’d ever see me do,” he said. “When she was able to see it, which was Broadway opening night, she was [seated] in the front row of the mezzanine, and I could look at her the whole show.”

“And that visual sensory memory is with me right here forever.”

If the period surrounding his time in “Rent” was momentous, Rapp’s recent past has been, too.

In 2017, Rapp accused fellow actor Kevin Spacey of sexually molesting him at a New York party when Rapp was only 14. This past October, a jury in a civil trial found Spacey not liable.

Even if the outcome wasn’t just in his mind, he said he takes heart in knowing that other people will be inspired by what he did.

“It is not easy to sit in that courtroom,” he said. “A courtroom is not a friendly place for complicated, traumatic, dark experiences.”

As his life moves forward, Rapp and his husband, Ken, recently welcomed a baby boy.

“I was weirded out and freaked out about the idea of a newborn,” he said. “I had not been around that many newborns; I had been around some babies. When I first held him, this tiny 7-pound, 4-ounce body was like, ‘I’m here,’ so I’m like, ‘OK, I can do this!'”

With all the developments in his life, now seems like the right time for his one-man show — an opportunity to look back and remember.

“If I knew years ago when I first did ‘Rent,’ if this was the best it was ever going to be, that would be enough,” he said. “And now, to get to do this full circle, honoring of all that, this feels like a bonus.”

“Without You” is presented at the New World Stages, New York City through April 30.

Vladimir Duthiers is a CBS News correspondent based in New York.

Esther Rantzen reveals she has lung cancer – but remains ‘optimistic’

Lisa Loring, who played Wednesday Addams in “The Addams Family,” dies at 64