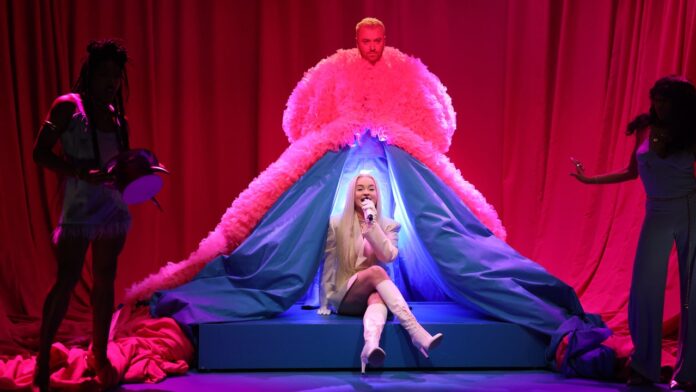 Sam Smith was the musical guest on Saturday Night Live last night, performing “Unholy” and the title track from their forthcoming LP, Gloria, due out next week. The episode was hosted by Aubrey Plaza. Check it out below.

During “Unholy,” Smith wore a voluminous hot pink dress, which was flipped open to reveal Kim Petras sitting inside. Petras emerged and sang her part on the recorded single. For “Gloria,” Smith was joined by choir of hooded singers. In the foreground of the stage, a woman reclined on a sparkly chaise lounge; that woman was Sharon Stone.

The 2023 episode was the third time Smith served as the musical guest on Saturday Night Live: They made their debut in 2014 and performed again in 2017. Smith released their last album, Love Goes, in 2020.

Watch Sam Smith break down their favorite vocal performances on Pitchfork’s video series “Under the Influences.”