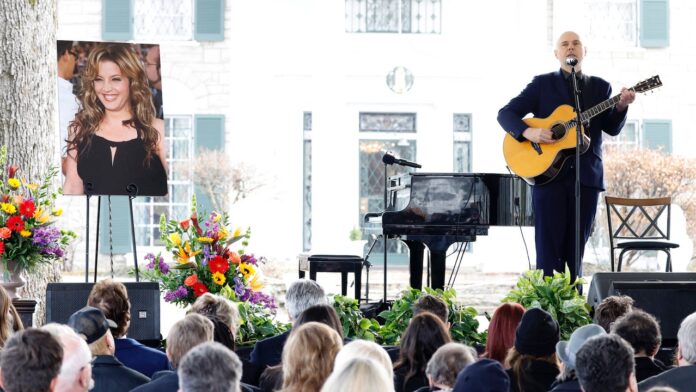 A public memorial was held for the late Lisa Marie Presley at her father’s Graceland mansion in Memphis, Tennessee, on Sunday (January 22). Billy Corgan, Alanis Morissette, and Axl Rose were among those who performed musical tributes to the singer, who died January 12 at the age of 54. The full service, including musical sets, was livestreamed by People.

Corgan was the first musical performer at the event; he played an acoustic rendition of the Smashing Pumpkins song “To Sheila.” Corgan takes the stage around 17-minute mark of People’s video, which you can watch in full below.

Alanis Morissette was next to perform. She appeared onstage following a speech by Sarah, Duchess of York. Morissette was accompanied by a pianist as she sang her song “Rest.” She debuted the track in 2017, when she sang it at the memorial service for Linkin Park frontman Chester Bennington, as Rolling Stone points out. Later on, Axl Rose sat at the piano to perform a stripped-down version of Guns N’ Roses’ “November Rain.”

Presley’s public memorial also included words of remembrance from her mother, Priscilla, Elvis associate Jerry Schilling, and many others, as well as a note written by her daughter, Riley Keough (read by Keough’s husband, Ben Smith-Petersen). Presley will be buried next to her son Benjamin, who died by suicide in 2020 at the age of 27.