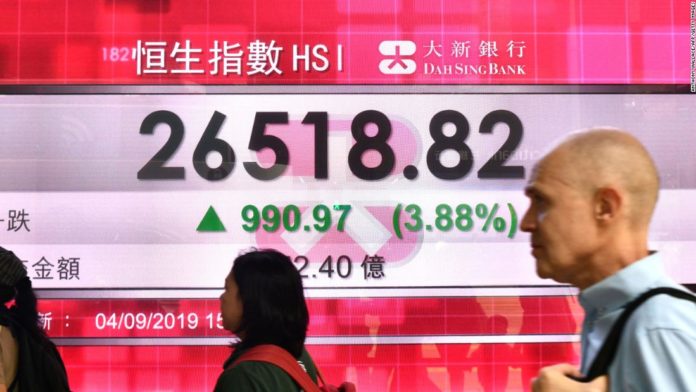 Japan’s Nikkei (N225) rose 0.5%, while South Korea’s Kospi (KOSPI) advanced 0.2% and China’s Shanghai Composite Index (SHCOMP) was about flat, but positive.
Hong Kong’s Hang Seng Index (HSI), the only major index in the region to end lower Thursday, ticked up 0.2%.
Stocks around the world mostly rallied Thursday after the United States and China agreed to meet soon to resume trade talks. That news sparked optimism that the two sides could work toward breaking the stalemate in negotiations.
“The buzz from the apparent de-escalation of trade tensions between the U.S. and China continues to be the only show in town,” wrote Jeffrey Halley, senior market analyst at Asia Pacific for Oanda, in a research note.
US stock futures were also all positive during Asia hours Friday.
Meanwhile, Fitch downgraded Hong Kong’s rating to “AA” from “AA+.’ The credit ratings agency cited persistent protests in the city that it said have undermined its creditworthiness. It noted that Hong Kong already faces other headwinds, including the US-China trade war.
Still, the agency predicted that Hong Kong’s “considerable financial buffers” will remain intact. It said it believes authorities can maintain the Hong Kong dollar’s peg to the US dollar, for example.
Investors will be watching later Friday for the US jobs report. And Federal Reserve Chairman Jerome Powell is expected to speak in Switzerland about the economy and monetary policy.
Separately, Chinese tech company Alibaba Group (BABA) announced Thursday that it will buy NetEase (NTES)‘s Kaola for $2 billion. The acquisition of the e-commerce platform will make Alibaba even more dominant in online shopping.
In addition, Alibaba will take a minority stake in NetEase Cloud Music.