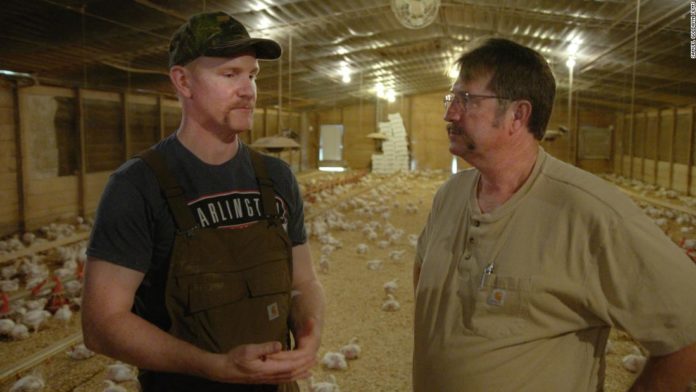 Spurlock, famously, ate only at McDonald’s for a month to demonstrate the dangers of fast food in “Super Size Me,” which became almost a horror movie for anyone who has spent a little too much time in the shadow of the golden arches.
The follow-up isn’t as neatly packaged conceptually — indeed, it’s a bit of a scattered mess — but still gets to the heart of Americans’ issues with food, the obesity epidemic and how we allow ourselves to be wooed, or at least reassured, by words like “fresh” and “natural” and terms like “free range,” even if, as presented here, they are revealed to possess relatively little true meaning.
Spurlock demonstrates his point in “Holy Chicken!” by opting to open his own fast-food restaurant, which means getting into the business of farming chickens.
As conceits go, it’s a little bit too precious, detouring into issues that surround the mistreatment of those farmers by large corporate interests (or “Big Chicken,” as they’re called), which takes the film off on what feels like a tangent relative to its central point.
The most salient aspect, rather, emanates from Spurlock’s meetings with marketing experts, who talk about creating “health halos” — essentially, dressing up fattening old fast food, the kind 44% of Americans consume at least once a week, with ingredients like kale or healthy options that perpetuate an illusion of those meals being better for you than they really are.
The public, of course, is complicit in the process. People generally prefer the taste of fried chicken to grilled, despite the stated desire to eat healthier — and more humanely.
In the movie, that’s demonstrated through a comical series of contortions designed to foster those impressions, from meeting the definition of “free range” in the most economical manner possible to literally painting grill marks on chicken to advance the idea that it’s merely “crispy,” not fried.
“That’s some pretty good bull***t right there,” Spurlock muses looking over proposed marketing materials, which bandy about terms like “no added hormones” and “cage free” that sound good but, stripped down, are exposed as being mostly hollow.
In many respects, “Holy Chicken!” is more about media literacy than anything else, and the extent to which consumers willingly allow themselves to be misled, if not outright deceived, by advertising.
“Have things really changed? Are things actually getting better?” Spurlock, again narrating the story, asks about fast-food consumption near the outset.
Compared to the original, both the message and the messenger look more flawed. But stripped to its core, “Super Size Me 2” answers those questions in a manner that still manages to leave you feeling shaken and, if not crispy, a little steamed.
“Super Size Me 2: Holy Chicken” premieres in select theaters in New York, Los Angeles and Chicago on Sept. 6 and additional cities and on demand on Sept. 13.