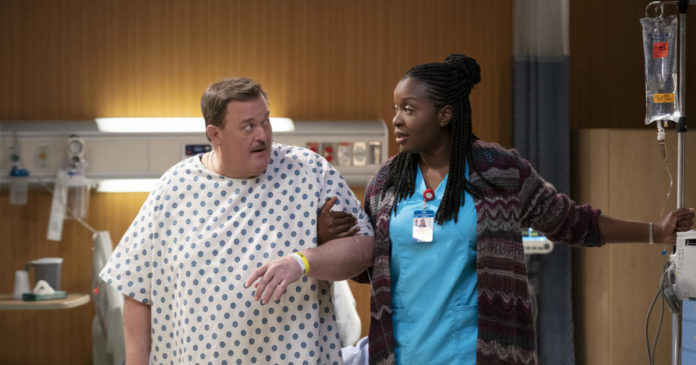 “Bob Hearts Abishola” may be a romantic comedy on the surface, but it also offers a groundbreaking glimpse into the lives of first-generation immigrants in America today. The show, premiering on CBS and CBS All Access this month, includes a Nigerian-born family as a focal point of an American sitcom.

On the show, Bob, the owner of a compression sock factory, has a heart attack and then falls for his cardiac nurse, Abishola, and attempts to win her love despite their differences. But executive producer Chuck Lorre says it’s also about so much more. While attending the Television Critics Association press tour, Lorre called the romantic persistence Bob has for Abishola the entry point into a series that tells the story of first-generation immigrants in the United States, and what grabbing hold of the American Dream looks like.

Bob is portrayed by Billy Gardell, widely known for “Mike and Molly.” When asked if preparing for his role in “Bob Hearts Abishola” was difficult, he told CBSN, “I think if you just stay on the track of kindness and love all that other stuff dissipates. I think we’ve forgotten that.” Gardell followed that by saying he thinks people are thirsty for kindness, laughter and shared experiences.

In an industry that often resorts to stereotypes and generalized depictions of people of color, “Bob Hearts Abishola” attempts to portray the experience of Nigerian immigrants with specificity and respect. Folake Olowofoyeku, the actress who portrays Abishola, is Nigerian herself, and sometimes in the series she will be seen speaking Yoruba. In an interview with CBSN, she revealed that the song her character sings to Bob, in the first episode, is from her childhood.

“The translation is three kids are playing, playing joyfully,” she said, adding that it’s a folk song that became a pop song in Nigeria.

In addition to casting a Nigerian actress in the lead role, Lorre worked with Gina Yashere, a British comedian of Nigerian origin, who took on the role of co-creator and producer of the show.

The show comes at a time when President Donald Trump’s efforts to crack down on U.S. immigration policy are frequently in the headlines. Yet Lorre says “Bob Hearts Abishola” is not a political show.

“It’s an homage of what we’ve been through, what our ancestors have been through, which is coming here and somehow finding a foothold and making a life for ourselves and for our children and descendants. If you dig deep, maybe every show is a political show. This is just a show that takes the time to recognize the greatness in that endeavor,” said Lorre.