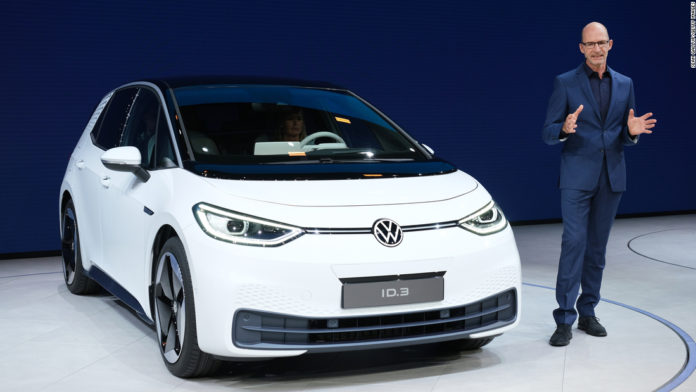 The ID.3, a compact hatchback, is the first in a planned family of ID electric cars from the automaker. It’s roughly the size of a Golf on the outside, but with a shorter hood — since there’s no engine — and a larger, roomier passenger area.
At a Volkswagen Group event at the Frankfurt Motor Show, VW executives spoke about how the ID.3 needs to represent Volkswagen’s return to its early days as a likable maker of fun cars like the Beetle. So designers gave the ID.3 a gently smiling “face” up front, with headlights that will turn on and flutter like eyes as the driver approaches.
The brake and accelerator pedals are also decorated with pause and play icons like an MP3 player. VW also promises it will be fun to drive, but we’ll have to see about that later. Less expensive versions will be able to go up to 330 kilometers, or 205 miles, on a charge while the most expensive ones will be able to travel 550 kilometers, equivalent to about 342 miles.
The base car will start at under €30,000 euros ($33,000) in Germany. According to VW, that should make its price similar to a gasoline-powered small car when government incentives are factored in.
The first cars will be delivered to customers in Europe in the spring of 2020. The VW ID family of cars will enter the United States market later with a crossover SUV version.