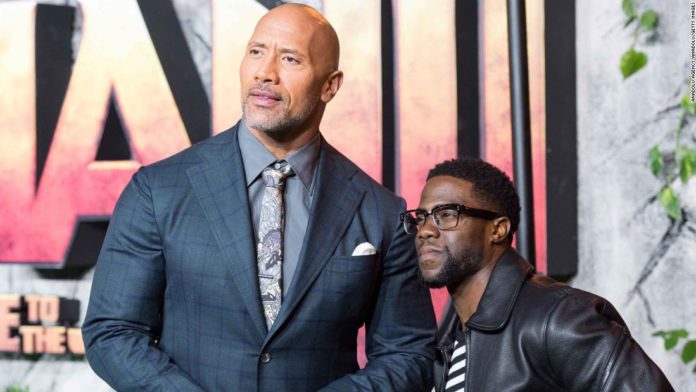 Appearing on the first episode of “The Kelly Clarkson Show” on Monday, Dwayne “The Rock” Johnson talked about the Hart’s recovery from a recent auto accident which left him with back injuries.
“I spoke with Kevin, I actually refer to him as my son,” said Johnson, joking about Hart’s smaller size. “I connected with him today. And you know what? These things happen in life and thankfully he was strapped in nicely to his car seat.”
Hart was one of three people involved in a recent crash in Calabasas, California, according to a California Highway Patrol incident report obtained by CNN.
Hart and the driver, Jared Black, sustained back injuries and were transported to nearby hospitals for treatment. The third occupant did not suffer any substantial injuries, the report states.
The three were traveling in a 1970 Plymouth Barracuda owned by Hart when Black lost control of the vehicle, according to the report, causing it to go off the road and roll down an embankment.
Authorities said Black was determined not to be under the influence at the time of the crash. CNN has reached out to representatives for Hart for comment.
Hart was actually supposed to be a guest on Clarkson’s new show, but Johnson left his honeymoon early to substitute for his injured friend.
The pair have appeared in a few films together, including the forthcoming “Jumanji: The Next Level.”
Johnson kept it light and joked “We spoke to his pediatrician, and he’s doing very well.”
“He’s bummed he couldn’t be here as you know, but I love the guy, he’s one of my best friends,” Johnson said. “Thank God, it could’ve been a lot worse. He’s a lucky man. I wish him the best.”