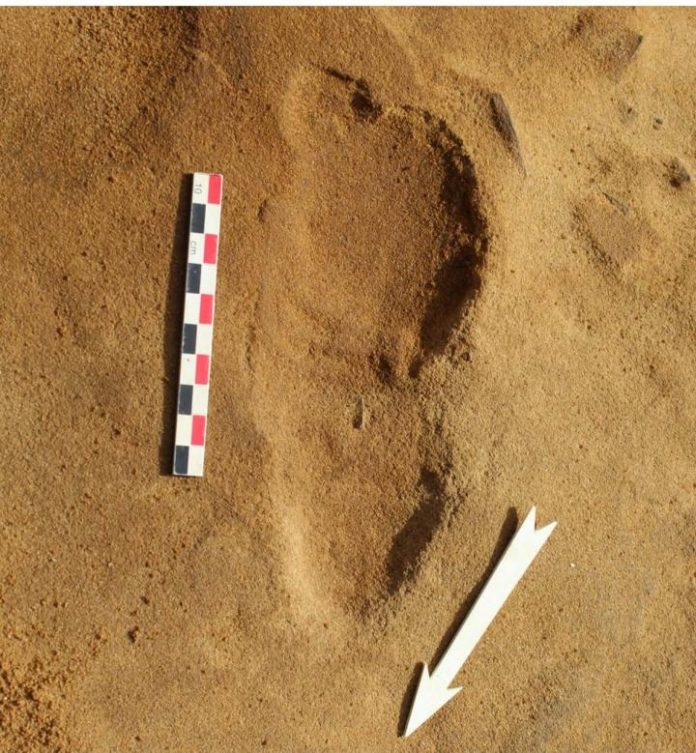 At first glimpse, it looks like the Neanderthals might have just vanished around the corner. Their footprints are engraved in the soft oceanside rock, like photographic negatives of their passage, seemingly ready to be swept away by the nearby ocean.

In reality, the impressions are around 80,000 years old, pressed into ancient sediments by a group of ancient humans and preserved by blowing sands. These footprints, 257 in all, were discovered in Normandy, France, and are the focus of a new analysis by researchers. They are revealing fresh insights into how Neanderthals lived, filling in gaps that bones and artifacts can’t speak to.

French scientists say they’re confident the footprints are of Neanderthal origin based on a few factors: the dimensions of the prints themselves (wide, and with a low arch) and the fact that Neanderthals were the only hominins known to be in Europe when they were laid down.

The footprints are located at a site called Le Rozel, on a peninsula on the country’s northwestern shore. The site was already known for its collection of preserved foot- and handprints from Neanderthals, as well as stone tools and butchered animal bones. Nearby caves were likely Neanderthal residences at various times.

The scientists looked at the size and shape of the footprints to estimate how old the individual who left it was. Previous research has laid down fairly reliable comparisons between Neanderthal foot size and height, and the researchers found that the majority of the prints were likely from children or adolescents. One of the footprints came from a child as young as two, while another belonged to an adult male who may have stood over six feet tall.

The new collection of footprints, published Monday in the Proceedings of the National Academy of Sciences, begins to highlight aspects of Neanderthal lives that have been more difficult to understand. The presence of so many young individuals is new to scientists, as the other rare instances where researchers have identified cohesive groups of Neanderthals have largely comprised adults. Instead, the group passing through 80,000 years ago was predominantly children or young adults, with just a few mature individuals mixed in. While it can be difficult to say whether different footprints came from the same individual or not, they estimate the group’s size at between 10 and 14 people.

The presence of so many children hints at new social dynamics among the ancient humans, ones that researchers will need further research to better understand. Was the presence of many children in a group common for Neanderthals? Or perhaps this group was an outlier.

In addition, these footprints capture a mere snapshot of these Neanderthals’ lives. Their activities surely extended far beyond walking an ancient shoreline, and the dynamics of their group then may not have reflected how they behaved at different time. What’s more, the Neanderthals were around for tens of thousands of years, and it’s not unlikely that their behaviors changed over the course of their history, much as ours have.

These footprints are a rare and valuable window into their lives — but there is far more to explore.