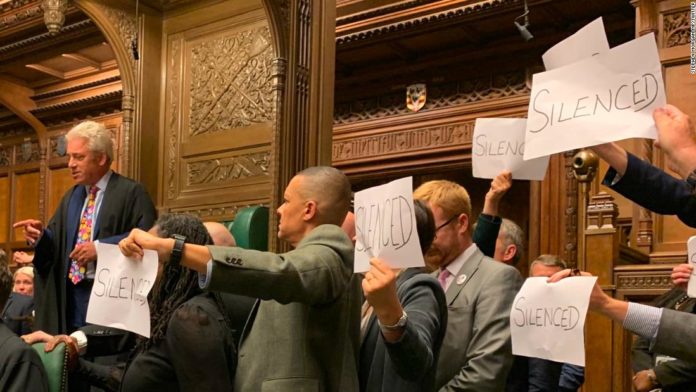 Opposition members of the House of Commons were furious at the five-week prorogation of Parliament, which critics say is an attempt by UK Prime Minister Boris Johnson to silence debate on Brexit and allow the country to slide towards a no-deal split from the European Union.
The government insists prorogation — or suspension — is constitutional and entirely normal for a new administration. But that has not satisfied members of Parliament who have dealt Johnson six defeats in six days, blocking a no-deal Brexit and then rejecting a government motion for snap elections on Monday night, in what was the final vote of the parliamentary session.
The debates had already been raucous, but chaos really set in when Black Rod, a senior official in the upper chamber, the House of Lords, entered the House of Commons to request the presence of MPs for the prorogation ceremony.
The arrival of Black Rod — Sarah Clarke, the first woman to hold the post — was met with a wall of noise from lawmakers opposed to prorogation. A group of opposition MPs then advanced towards the Speaker’s chair and a small scuffle broke out.
MPs crowded around Speaker John Bercow, who had announced his resignation earlier on Monday, holding signs reading “Silenced.”
Bercow then added to the drama with an extraordinary show of dissent, briefly refusing to heed Black Rod’s order to leave the Commons.

He proceeded to denounce Johnson’s decision to prorogue Parliament. “This is not a standard or normal prorogation,” he said. “It’s one of the longest for decades and it represents an act of executive fiat.”
As Conservative MPs heckled him, Bercow replied: “I could not give a flying flamingo what your view is!”
Bercow eventually rose from his seat, and was joined by Conservative MPs as they made the walk to the House of Lords. They were followed by chants of “Shame on you.”
In the House of Lords, the arcane ceremony got underway. This included the Clerk of the Crown reading out the titles of acts that had been passed in the parliamentary session. As each was announced, the Clerk of the Parliaments turned to face lawmakers and declared “la Reyne le veult” — Norman French for “the Queen wishes it.”
In the House of Commons, meanwhile, some lawmakers proceeded to sing songs including the hymn “Jerusalem”, “Scots, wha hae”, ” The Red Flag” and “Bread of Heaven” — in Welsh, and including harmonies.
Bercow returned to Commons to confirm the prorogation. It all ended around 2 a.m. (9 p.m. ET) when opposition lawmakers lined up to shake the Speaker’s hand, capping off an acrimonious day in Parliament.
Lawmakers will return to Parliament for a Queen’s Speech in mid-October — little more than two weeks before the Brexit deadline is to expire.

Rob Picheta contributed to this report.