Home Music At Rihanna’s Diamond Ball, Rap’s Elite Unite for a Good Cause 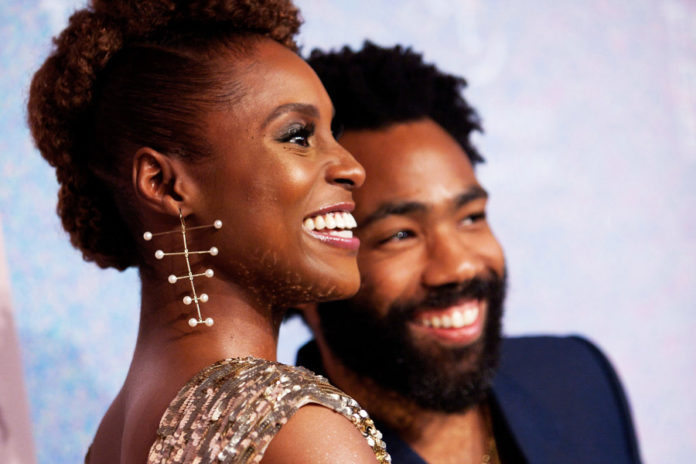 “What an incredible time to be a fan of Rihanna,” Seth Meyers reflected. Of course, the audience that attended the pop star’s Fifth Annual Diamond Ball at Cipriani Wall Street Friday night were comprised of more peers and businesspeople than diehard fans. The response was still enthusiastic, even if the diehards were at home begging for album updates and worried that the reason why they loved Rihanna in the first place — her music career — has made it even harder to do their current duty as fans.

The Rihanna today has found herself focused on several other ventures. She launched a successful make-up line, Fenty Beauty, that has become a staple for professional and amateur enthusiasts alike thanks to its inclusive range of foundation shades and daringly pigmented lipsticks, eyeliners and highlighters. While she has been a fashion icon for much of her career, she has now conceived several lines that allow her to make everyone pretend like they can dress as cool as her. The size-inclusive Savage Fenty may have usurped Victoria’s Secret’s more narrow stranglehold on the lingerie industry, as proven by Savage’s thrilling New York Fashion Week shows from both this year and last year. She even has a couture partnership with LVMH Moët Hennessy Louis Vuitton, making her the first woman of color to be the head of LVMH maison.

Even closer to Rihanna’s heart is the Clara Lionel Foundation (CLF), her charity focusing on climate resiliency efforts in the face of natural disasters. CLF primarily provides aid to countries in the Caribbean, where her home Barbados sits at risk of rising waters as our Earth’s climate crisis continues to put all our lives in danger. CLF more recently assisted the Bahamas in the face of Hurricane Dorian, supplying emergency grants for food and other resources.

As with every prior Diamond Ball, Rihanna challenges the entire system of typically white-bred galas. In the early evening, before the 500 attendees were seated downstairs, rappers like 21 Savage, 2 Chainz, Offset, A$AP Rocky and Meek Mill mingled over cocktails with shareholders and venture capitalists. Frank Ocean played over the speakers when the guests were finally invited to take their seats and begin the three-course meal. The theme was grassy and floral; some tables were covered with large, glittery umbrella-like structures. The centerpieces were mossy orbs and fresh pink roses sat in clear test tubes.

By the bar, a Fenty Beauty station allowed attendees to either get a touch-up on their make-up or buy highlighter and make-up bags, all the proceeds of which went to CLF. A flashy fountain made of ice served up a pink D’usse cocktail. Giant screens hosted the silent auction as smaller stations allowed a quick and easy way to donate $100: each attendee was given a card on entry that had the face of a young person who has benefitted from CLF. If you tapped the card and viewed the story, American Express automatically made a $100 donation to the foundation. 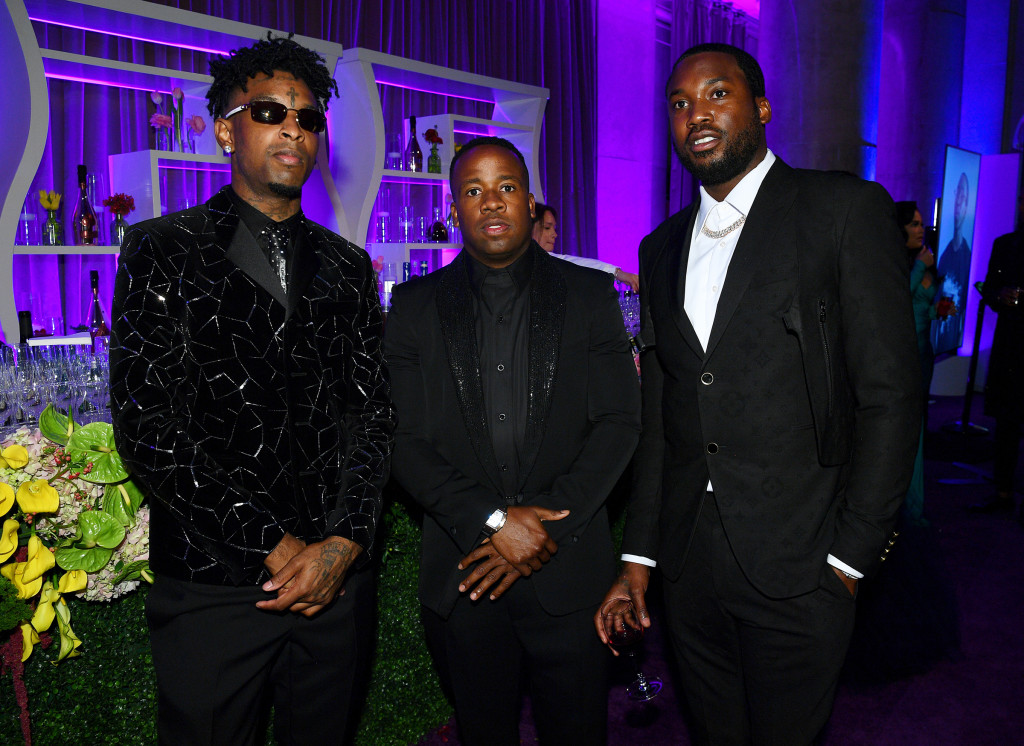 Meyers made his first appearance after the first course, speaking highly of Rihanna and even more highly of drinking with Rihanna. Rihanna followed, clutching a folded white paper that she barely needed. She was omnipresent but refused to take up too much stage time, keeping her introductory speech short before ceding the stage to CLF executive director Justine Lucas.

Of course, the point tonight was to raise insane amounts of money. Two separate auctions were held, making available items like a 20-person trip to the Barbados complete with a submarine ride and three villas. (Sold twice for $275,000 each.) A Roc Nation VIP sports package that included tickets, meet & greets and four bottles of comically large bottles of luxury champagne (one was a cool 12 liters) sold for $105,000. Cardi B, a tough negotiator, ended up buying a 504-page, matte-black book about Rihanna and the accompany 2,000-pound, Haas Brothers marble pedestal it is meant to sit on for $111,000. Only nine other people in the world will own the same book.

During dessert, the foundation honored activist and journalist Shaun King alongside Barbados’ first female prime minister Mia Mottley. Mottley recalled her stint as the minister of education in the country while Rihanna was in school. Her speech was touching, passionate and rousing. She spoke optimistically about the work that needed to be done with regards to climate change, comparing it to JFK declaring he would get a man on the moon before he knew how to do so. The second auction followed soon after, with a lightning round of donations ranging from $1,000 to $100,000 made to CLF without luxurious trips or pedestals attached. The auctioneer announced that Twitter CEO Jack Dorsey would match those donations, up to $1,000,000 as a boosted incentive.

Pharrell Williams began the musical portion as the guests evacuated their seats to crowd around the stage. His hour-long set gave equal weight to his work as a singer and lead artist as well as a producer with a golden ear. Joined by a group of female back-up dancers, Williams performed a fast-paced, chopped-up slew of his hits and reminded everyone how instrumental he has been to the sound of pop and rap. He opened with N.E.R.D.’s “She Wants to Move” and moved on to tracks he had been prominently featured on like Jay-Z’s “Excuse Me Miss,” Future’s “Move that Dope” and Robin Thicke’s “Blurred Lines.” 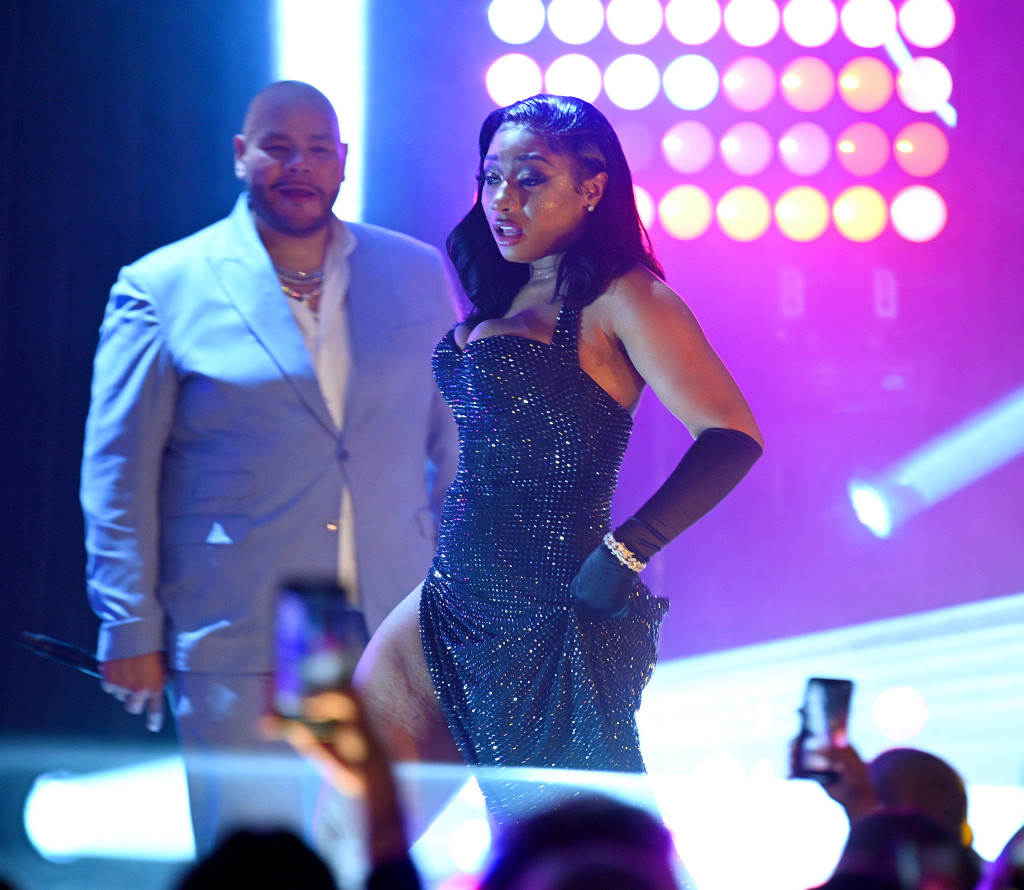 The true feat of Williams’ set was his sole special guest: Rihanna herself. The pop star joined him for their first-ever live performance together of the track “Lemon.” She started in the crowd before getting pulled up to the stage. She was loose and confident, expertly handling what seemed to be an unplanned performance. It was almost like she was as surprised as the whole room that she rapped during her own event.

Throughout the set, Williams rapped and sang along to the songs he had not originally performed on but had a hand in creating, like the Carters’ “Apeshit,” Migos’ “Stir Fry” and Gwen Stefani’s “Hollaback Girl.” During the Stefani hit, an already gleeful A$AP Rocky became even more exuberant, dancing with the crowd around him and screaming along to the megahit. Williams ended his time onstage with the one-two punch of Daft Punk’s “Get Lucky” and his solo hit “Happy.”

A clip package of DJ Khaled’s most recent music videos preceded his entrance. He was in peak Khaled form, yelling out his hashtaggable catchphrases (“We the best!” “DJ Khaled!” “Another one!”) As the tracks he has executive produced were played by another DJ behind him, including “All I Do Is Win,” “I’m on One” and “Wild Thoughts” (no Rihanna encore for this one). Khaled, however, did not have a lack of special guests. Fat Joe, A$AP Ferg, G-Eazy, Megan Thee Stallion and 2 Chainz were among the friends and collaborators he brought onstage as he nodded supportively behind them.

All the while, Rihanna floated through the crowd more like an affable hostess at an intimate dinner party than a billionaire businesswoman and platinum pop star. But carrying herself as the former is what made the balance of the latter so easy for her in the first place.