Home Music Why Madonna’s Madame X Tour Is the Gloriously Insane Mess of Your... 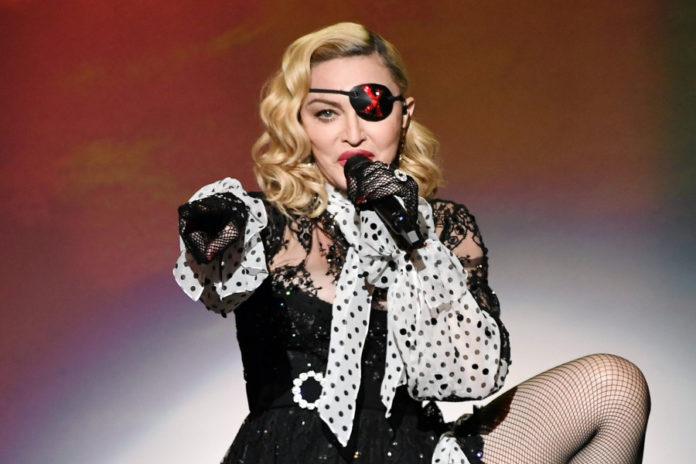 Madonna has never shied away from taking chances. Thirty years after she set fire to the Eighties with the disco basilica Like a Prayer, she’s as gloriously weird as ever. Hence her excellent new Madame X tour, a testament to the genius in her madness. Instead of a full-blown tour, she’s doing these shows as residencies in intimate venues, starting with 17 nights at the Brooklyn Academy of Music’s Howard Gilman Opera House. The tiny rooms are the perfect place for Our Lady to strut her stuff. Like her Madame X album, the show is messy, but anyone who’s scared of a mess should avoid Ms. Ciccone entirely, because as any fan knows, her weirdness is where she finds her greatness.

The show follows Madonna’s adventures around the globe. “Everybody knows I moved to Lisbon to become a soccer mom,” she said on Thursday night. “I found myself alone, without friends, a little bit bored.” So after too many Sundays at her son’s soccer games, she started going out to Lisbon clubs and flipped for Portugal’s fado rhythms, which got her creative juices flowing again. As she announced, “From now on, I’m Madame X and Madame X loves to dance!”

The show started extremely late — she didn’t go on until nearly 11 p.m., which she kept joking about all night. “Forgive me if I kept you waiting too long this evening,” Madonna purred seductively, stretched out on top of a piano. “I don’t like to keep you waiting. But I have an injury. I have six kids. I have a LOT of wigs.” Then she had a couple of her dancers help her off the piano and improvised a pop melody: “I bet you had more sleep than meeee!” No rest for the wicked, indeed.

It was a cellphone-free show, with the audience’s phones locked into Yondr pouches that got unsealed at the end of the night. (Honestly, all shows should be this way.) Madonna kept mentioning how much she enjoyed looking into the audience and seeing our eyes as opposed to screens. “The eyes are the window of the soul. But there’s one window you’re forgetting.” She opened her legs, to a blast of orchestral music. “Ladies and gentlemen, this is what it’s like to have Mozart coming out of your pussy! I am one classy broad!”

The Madame X songs work much better in a theater setting — the album has always felt more like a soundtrack to a stage spectacle, an Original Cast Recording, than an actual listening experience. She had a small army of dancers, plus scene-stealing musicians like trumpeter Jessica Pina and cellist Mariko Muranaka. One of the highlights came early on: “Human Nature,” one of her most enduringly great Nineties hits. She turned it into a stripped-down confession, writhing athletically before doing a bongo solo. It ended with Madonna surrounded by 11 black women — including three of her daughters, Stella, Estere and Mercy James — chanting, “I’m not your bitch!” Madonna yelled at the end, “Have we made ourselves cleeeear?” Just in case, she handed the mic to the very young Stella, who said, “Hashtag #TimesUp!” For good measure, the ladies sang an a cappella chorus of “Express Yourself.”

The show opens with a motto from James Baldwin: “Art is here to prove that all safety is an illusion…Artists are here to disturb the peace.” Fighting words, but Madonna lived up to them in “God Control,” an elaborate production number with cops attacking the dancers under a video montage of news footage. Points were made, including gun control, police brutality and why Madonna doesn’t approve of smoking dope.

Her comic banter was as stellar as the music — she was loose, salty, spontaneous, thriving on her closeness with the crowd. At one point, she crashed in a vacant seat next to a London fan named Dan, flirted, drank his beer, apologized for going on so late, drank more of his beer (“I come from a long line of alcoholics”) and then said, “Dan, you’ve been a great crowd, but I need to get on with my journey.” As she explained, “Freedom is the theme of this show. And the theme of my life, for that matter.” 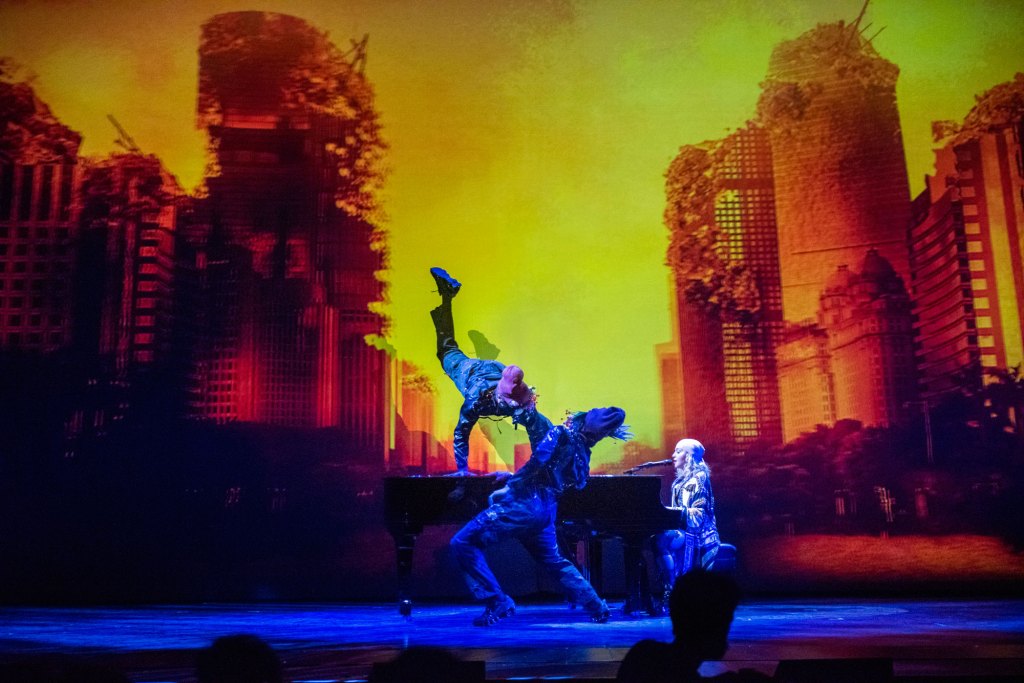 The night’s two big emotional powerhouses came near the end. She sang “Frozen” all alone, visible behind a video screen of her eldest daughter Lourdes doing an interpretive dance, with her “MOM” knuckle tattoo. It was a beautifully simple moment — just the singer, the daughter and that song, a show-stopper from the album (Ray of Light) where she fully embraced her hippie-mama spirituality. It also demonstrated that for all her love of theatrical excess, she’s a singer before she’s anything else. The night climaxed with a full-choir “Like a Prayer,” a moment that felt sacred yet also sleazy — the ultimate Madonna combination.

Madame X has the global sprawl of her 2001 Drowned World Tour, which this fan would definitely have to pick as her best live show ever. She included a a fantastic fado interlude, starring the Portuguese guitarra of 16-year-old Gaspar Varela. Madonna sang a fado chestnut made famous by his great-grandmother, the late Celeste Rodrigues. There was also a showcase of Batuque musicians from Cape Verde, the all-female Orquestra Batukadeiras, working a centuries-old percussive tradition. She picked up her guitar to cover the Cesária Évora classic “Sodade” — a fangirl moment very much in the Madonna tradition, because what makes her a pop genius is the way she moves so fluidly between fangirling and creating her own art. It echoed her last tour, when she covered Edith Piaf’s “La Vie en Rose,” which somehow wound up as Lady Gaga’s big drag-show performance in A Star Is Born. (Don’t be surprised if “Sodade” shows up in Gaga’s next Oscar-winning film?)

As always, she focused on new material, doing almost all of the erratic Madame X. (Alas, not “Bitch I’m Loca.”) But the most powerful moments came when she revamped her classics. “Vogue” became a B-movie fantasia with a troop of femme fatales in a black-and-white film noir cityscape, wearing blonde wigs, shades and trench coats. She strummed “La Isla Bonita” as a guitar cha-cha. “This is my striptease right here,” she announced. “This is as X-rated as it’s gonna get tonight.” Then she peeled off one glove, in homage to Rita Hayworth in Gilda and Natalie Wood in Gypsy. One of the night’s big musical surprises: “American Life,” which holds up remarkably well, as she vented her eccentric political rage with Mirwais Ahmadzaï’s vintage Francodisco frisson.

The stronger songs from Madame X came alive in this setting — especially “Extreme Occident,” “Crave” and “Crazy,” where she dropped to her knees before one of her dancers and sang, “I bend my knees for you like a prayer,” a foretaste of the “Like a Prayer” climax to come. She did “Medellin” with a video boost from Maluma. She did just one verse of “Papa Don’t Preach,” as an excuse to change the key line to “I’ve made up my mind / I’m not keeping my baby.” (The song could have used that tweak back in 1986, but better late.)

The crowd was camp as Christmas and twice as loud, gathering Madonna worshippers from all over the world, dressed to the nines. Shout out to the silver fox rocking his vintage “Frankie Say Relax” T-shirt. (Bet he’s the same guy wearing that shirt in the new Beastie Boys Book, in the photo of fans outside their 1985 NYC show as Madonna’s opening act.)

In some ways, this show is Madonna’s version of Springsteen on Broadway, scaling down to an intimate theatrical setting to tell one account of her life story. It’s yet another bond for these two oddly linked legends, who’ve been topping charts together since the days when Like a Virgin went up against Born in the U.S.A. In June, Madonna’s latest concept album debuted the same week as Bruce’s Western Stars cowboy trip, giving them the Number One and Two albums. How gratifying that these two Eighties icons are not only still topping the charts, they’re doing it with their wildest, most experimental work. We chose well when we picked these two as our heroes, right? As Madame X proves, Madonna will never be the kind of superstar who repeats her successes, sticks to her strengths, or plays it safe. Instead, she’s getting weirder with age. Thank all the angels and saints for that.