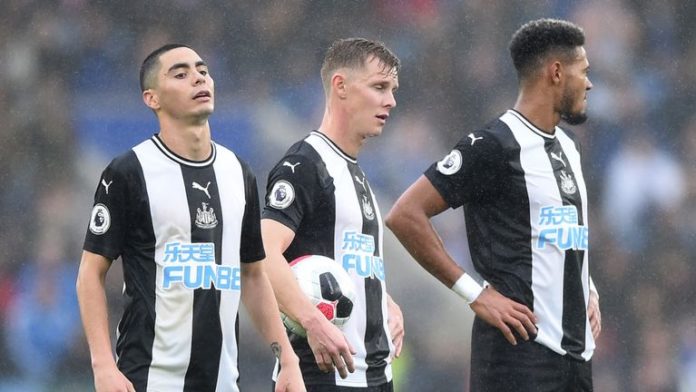 Captain Jamaal Lascelles called it terrible; Andy Carroll labelled it as disgraceful; and young midfielder Sean Longstaff said it was nothing short of an embarrassment.

But goalkeeper Martin Dubravka had literally “no words” to describe Newcastle’s King Power capitulation on Sunday.

The Newcastle No 1 had the worst seat in the house from his side’s perspective, as the horror of the 5-0 mauling played out right in front of his eyes.

And so shocked was he by what he saw, the Slovakian goalkeeper sat at the back of the flight home to Newcastle in silence as he played every goal over and over in his head.

Speaking for the first time since the biggest defeat since he signed for the club nearly two years ago, Dubravka told Sky Sports News: “Nobody spoke on the flight home, it was silent.

“We usually chat away to each other and play games but there none of that. It was horrible and quiet. I sat at the back of the plane and spoke to nobody. I had no words. I just kept replaying the game in my own mind.

“It’s hard to forget. I heard how the other boys described the performance and I agree with them all. I’m right at the back (on the pitch) and I can see everything. It didn’t work and wasn’t good enough. It was just embarrassing.”

“It was a crazy, really bad defeat”, Dubravka added, who was at fault for Jamie Vardy’s strike to make it 2-0. By that point Newcastle were already down to ten men and about to throw in the towel.

“Every player felt very bad after that game,” Dubravka admitted. “Straight afterwards we were full of emotion and strong words were said in the dressing room – but it means we care.”

So does that mean a revert back to the tried-and-trusted five-man defence that served the team so well under Rafa Benitez?

“We went to four defenders but I have to say it didn’t work,” Dubravka said.

“We’re used to playing with five at the back which probably fits us (better). But I understand that the manager is trying his own style. We’re trying what the gaffer is expecting of us, unfortunately it didn’t work this time.

“What is the difference from last season? It’s hard to say, but we need to stabilise our performances. We can’t play like we did against Spurs one week then at Leicester the next.

“We have a new manager and we need time. It takes time to know what he wants to do. But I still think we have quality players in our squad.”

Newcastle will need those players to be at their best on Sunday as Manchester United come to town, and Dubravka has fond memories of the fixture after a Man-of-the-Match display on his debut last year.

The 30-year-old smiled: “I was so focused that day, we won and it was an amazing feeling. That day I thought about nothing but that game. My keeper-coach said he could see it in my face that I was going to play well.

“They (Manchester United) have some problems too but we’re playing them at home so we know we have a chance. We just need Sunday to come around quickly and we’ll do things better.

“The supporters deserve that. I felt so sorry for them (on Sunday) as they kept singing at 4-0 behind. I’ve never seen that before. I was so lucky to have good fans supporting me at my previous clubs but this is something special here.”