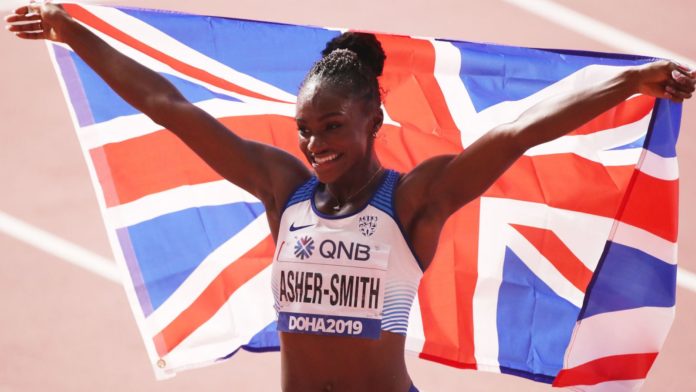 Dina Asher-Smith has become the first British female to win a world sprint title after taking gold in the 200m final at the World Athletics Championships in Doha.

After winning silver in the 100m final on Sunday night, Asher-Smith’s favourite-tag for the 200m was boosted when a host of rivals pulled out.

“I know I was tired and woke up today knowing this was the last individual chance and this was the moment I did all my work for,” she said.

“This is what we knew we could achieve if the season went well and the tiredness just disappeared when I needed it to.

“It means so much. There’s so many British fans here and I know lots of Brits live in Doha but lots have travelled and for my mum to be here, my dad, John and his wife and my physios it means so much.

“You’re only the favourite if you go out and perform how people expect you to and I was really focused on putting together a good race. I dreamt of this but now it’s real.”

What does this mean ahead of the Olympics?

Asher-Smith has become one of the world’s best sprinters over the last 18 months.

A 200m victory after Sunday’s impressive 100m silver sent out a huge warning to her rivals ahead of next year’s Olympics in Tokyo.

It is unfortunate she has encountered the returning Fraser-Pryce in imperious form as her 100m final time of 10.83 seconds would have been enough to win gold at the London World Championships two years ago.

Can she go faster?

The British record holder broke her own 100m mark on Sunday for the second major championships running.

Last August she set 10.85s to win gold at the Europeans in Berlin but went better in Doha.

On Wednesday she turned on the afterburners to take the title but will have to go faster if she wants an Olympic title.

Earlier on Wednesday, Laura Muir safely qualified for Thursday’s 1500m semi-final after her return from injury.

The 26-year-old was running her first competitive race since tearing a calf muscle at the Anniversary Games in London in July.

The American was given a four-year ban on Tuesday by the United States Anti-Doping Agency after being found guilty of doping violations.

Salazar runs the Nike Oregon Project and was stripped of his accreditation so could not have any contact with his athletes but Muir chose to ignore the controversy.

“All I can do I focus on myself, that’s all I’m in control of. I love the sport for what it is, I love to run and compete,” Muir said.

“No matter what the circumstances I’m going to race. Whoever is there is up to other people.

“At this point all I can do is focus on myself, that’s all I’m in control of. I’m the only person I can speak for and vouch for.”

On her fitness, Muir added: “It was a pretty good feeling, I was quite nervous before the race.

“I’m usually not for the heats but it’s just been so long and it’s so good to be out there, feel like myself and be like ‘oh, I can still run’.”

Sarah McDonald joined her in the final but there was disappointment for Tim Duckworth who pulled out of the decathlon after an injury in the warm-up.