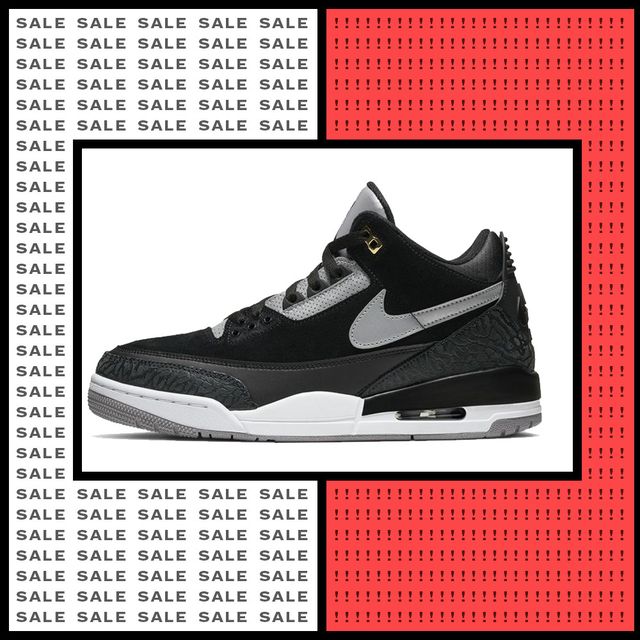 That Nike swoosh is a powerful thing, man. At some point in each of our lives, there’s been a Nike sneaker that stopped us in our tracks and was quickly sorted into the “must-have” space in our brains. From accent pieces for dressed-up looks, outfitting for technical fits, or the exact right kick to take on a long run, Nike has always had an option that not only feels good, but looks damn cool, too. So when the brand slashes prices on some of its staple silhouettes, like they did this week, it’s most certainly worth your attention. We combed through the long-long list of recently-reduced options to pull out which ones are most worth your hard-earned cash.

Leading the pack is the Air Jordan 3 Retro Tinker, Tinker Hatfield’s extremely wearable spin on an already iconic shoe. But there are also options for the function of it all, with, say, Nike’s VaporMax or React Element. With the list below, you can’t go wrong. Even if you’re a suburban dad just trying to mow the lawn (or look like a suburban dad who has a lawn). Hell there’s even a deal on a pair of slides equipped with pockets for all your tiniest essentials. (Take these on vacation, and suddenly there’s a stylishly convenient place to stash your car keys, your room key, or an opener for that cold one you’re sure to crack.)

In any case, these are the 10 sneakers we think are well worth taking advantage of being on sale.

We wrote about these when they first dropped, and here’s what we said.

The OG version of the Air Jordan 3 from designer Tinker Hatfield featured a Nike swoosh, and last year, to celebrate the design’s 30th anniversary, Jordan brought that version out into the world. It’s divisive for some fans, but we say it’s a solid look. And this version, in a Black Cement colorway that’s toned down but still features the iconic elephant-print leather, is an especially wearable version of the retro-new riff on the shoe.

The Air Max 97 is iconic. And this black colorway tones down it’s usually busy-looking detail in a way that helps you pay homage to its glory without having to dress so loudly.

Nike’s Blazer is a bona fide classic. A simple shoe you can wear with anything from sweatpants to a suit. The furry detail on the heel here only adds more character.

There’s nothing too complicated about the Nike React Element, aesthetically at least. But it’s just interesting enough to make people ask you about them—and their React technology helps when you’re in need of sudden agility.

When I was in middle school, anyone who was anyone had a pair of Tailwinds. I did not, because I was, indeed, nobody. But I saw a cool guy in the park wearing them last week and it brought back major memories. Be the coolest kid in middle school again and grab them in this fierce black, white, and red colorway.

The VaporMax is a special shoe. It looks (and feels) like the future. This colorway is especially exciting, without being too over the top.

Lean into the tech of it all with a sneaker that looks like it just asked you to scale a cliff. A great shoe for an all-black look—especially of the tracksuit variety.

The Air Max 95 doesn’t get as much love as the rest of its family (the Air Max 1 and Air Max 97 specifically), but this is a sneaker with major steez. Grab it in all white and wear it year round. Looking icy is bound by no season.

You don’t need to be a baby boomer with a lawn to cut to own a pair of Monarchs. But if you are a baby boomer and you do have a lawn to cut, a $55 pair of sneakers will do the trick. The dad shoe vibes haven’t yet escaped the zeitgeist, so why not lean all the way in?

You won’t know you needed a pair of fanny pack slides until you already have them. But beyond the utility, these bad boys are comfy.