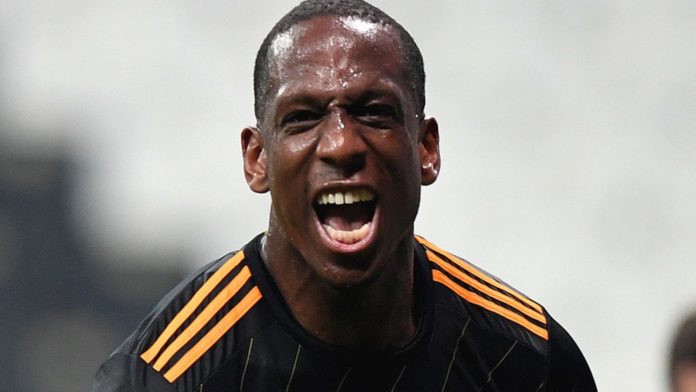 Willy Boly scored a 93rd-minute winner for Wolves as they grabbed their first Europa League victory, beating Besiktas 1-0 in Istanbul.

Both sides lost their opening Group K games two weeks ago and have won just one league match so far domestically, and it showed in a game that lacked finishing quality.

But ultimately, Wolves put in a classic away performance, keeping Besiktas at bay for much of the game before scoring a late winner as Boly turned the ball home late on.

Wolves move off the bottom of Group K and into third, one point behind Braga and Slovan Bratislava, who drew in Group K’s other game on Thursday. Besiktas are now in fourth as their dismal start to the season continues.

How Wolves snatched the victory

The first half was not blessed with chances, and it took until the 28th minute for either side to test the goalkeepers. It was Liverpool loanee Loris Karius who got down low to make a save, keeping out a Pedro Neto cross that took a nick off Domagoj Vida on the way through.

Not long after, Jeremain Lens twisted and turned past Jonny on the right before firing in a cross, but Caner Erkin sent it firing well over the crossbar.

Man of the match: Willy Boly.

Besiktas piled on the pressure as the game headed towards the break, and Conor Coady almost scored a calamitous own-goal, but diverted a Besiktas corner onto the post.

Dorukham Tokoz tried to net the rebound, but skied it over the crossbar.

Willy Boly showed some wonderful defending with a minute to play as he stopped Mehmet Umut Nayir from converting a fizzing Erkin cross, allowing Rui Patricio to pounce on the loose ball.

Besiktas had two early second half efforts to test Wolves’ resolve. The first was a wonderful, curling shot from Erkin that landed into the hands of Patricio.

Wolves made two changes from the side that beat Watford 2-0 at the weekend. Ruben Neves and Morgan Gibbs-White replaced Leander Dendoncker and Adama Traore in the XI.

Boly then showed more superb defensive qualities as he got ahead of Nayir to clear a Lens cross after the former Sunderland forward made a sensational forward run.

Wolves had their best effort of the second half in the 55th minute. Joao Moutinho delivered a wonderful free kick, but Raul Jimenez could only direct his header over the crossbar.

Karius made a wonderful save from a long-range 12 minutes later, after a curling effort from Romain Saiss as Wolves enjoyed a good spell in attack.

The visitors turned up the pressure as they searched for a winner, and had a goal ruled out for offside in the 89th minute.

Karius saved Leander Dendoncker’s initial shot but Saiss was waiting at the near post to poke the ball home – but the linesman’s flag was raised.

However, replays showed he was onside – but with no VAR in the Europa League group stages – the goal could not be reviewed.

Wolves finally made the breakthrough in the third minute of four added on. Ruben Neves floated a wonderful ball over the top and picked out an unmarked Boly, who took a touch before turning and firing past Karius and sealing a first Europa League win for the Premier League side.

Wolves manager Nuno Espirito Santo said: “It was good. In the end we were happy. I think the boys worked very hard. Through all the game we were competitive, believing until the end and we got this moment of Boly that gave us a good victory in a tough, tough stadium. Besiktas are a good team, they pushed us, but we were organised, so I’m happy for the boys.

“We have a lot of things to improve. OK, we won, but the performance must be better. It’s about how we do our things, how we play, how we grow, all these things. How the players did, why some of them didn’t perform so well, we must find the why, this is my obsession.

“They [the players] are already recovering because Sunday we play. It was two minutes of celebration only. We are already preparing for the next one. We have a long season, Thursday, Sunday, it doesn’t stop.”

Man of the match – Willy Boly

Wolves had to defend well in Istanbul and Boly was a huge part of that. On more than one occasion, he got ahead of the Besiktas dangermen to cut out passes and made some wonderful blocks. He also set off attacks from the back and ultimately, he won it for Wolves.

It was a well-taken goal for a defender, taking a great touch before slotting home. It wasn’t his only chance in the game either, having headed a glorious chance just wide earlier on. But he scored when it mattered and is the hero of the hour.

Next up for Wolves is a trip to Manchester City in the Premier League on Sunday ahead of the international break. Their next Europa League outing will be on Thursday 24 October as they travel to Slovan Bratislava in Slovakia, which is due to be played behind closed doors.

Besiktas will also take on Alanyaspor in the Turkish Super Lig on Sunday before hosting Braga in their next Europa League game.