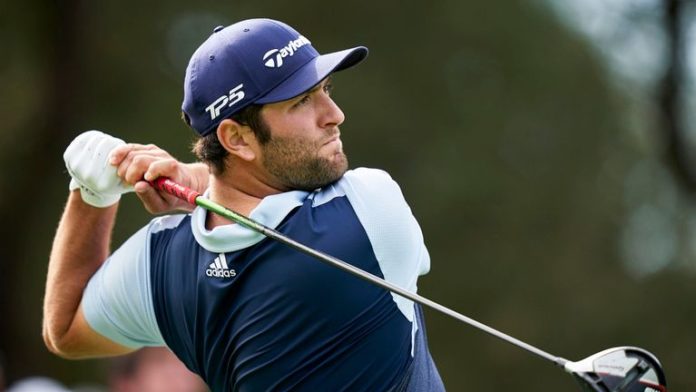 Jon Rahm maintained his quest for a successful defence of his Open de Espana title as he was among four home players at the top of the leaderboard after day two.

Rahm was outshone by playing-partners Rafa Cabrera Bello and Adri Arnaus, who share the lead on 11 under heading into the weekend, with Samuel Del Val one shot behind and the defending champion well placed on nine-under par.

Arnaus led outright after he recovered from an early bogey at the second with five birdies in seven holes from the fourth before holing a 25-foot putt for his second eagle of the week at the 14th.

But he had to scramble hard for pars at 15 and 16 and then missed a five-foot putt for birdie at the penultimate hole, and a wayward tee-shot at the last led to his second bogey of the round in a disappointing end to a 66.

His late mistake allowed Cabrera Bello to jump into a share of the lead, the 2016 Ryder Cup star carding six birdies in a bogey-free 65 as he completed 36 holes without a blemish for the first time in his European Tour career.

“You don’t get to go bogey-free very often and two days in a row – I’m not sure how many times I’ve done that,” said Cabrera Bello, who is chasing his first win since the 2017 Scottish Open. “I’m very pleased with how I’m playing, I’m feeling confident out there and in control of my game.

“Yesterday was a dream day, and today we had it again, I think we’re minus 31 for the three of us, which is remarkable. We’re feeding off each other and off the crowd. Bouncing off each other, it’s amazing.”

Del Val was six off the lead with seven holes of his second round remaining, but he stormed into contention with four birdies in five holes in a 65 which lifted him to 10 under and earning a place in Saturday’s final group alongside Cabrera Bello and Arnaus.

Rahm will head out 11 minutes beforehand after he also battled back from a frustrating start, running up a double-bogey at the second before getting his title bid back on track with three birdies in four holes, he delighted the galleries on the back nine with three consecutive birdies from the 13th.

The world No 5 misjudged his approach to the 16th and was unable to save par from over the green, but he was rewarded for an aggressive drive at the last as he pitched in close and holed the putt for a 67.

“I was lucky to only be two over through two,” said Rahm. “I saved a heck of a par on that first hole. It was a little shaky, but things like that happen. I was battling bad swings two days ago, yesterday was great, today I was trying to find the same feeling but I figured it out after that double-bogey.

“My body is feeling good and I’m hoping to start well tomorrow, give an early scare to these guys and get the lead. I keep forgetting I’m defending champion, I’m just so focused on what I have to do, I’m focused on beating Adri and Rafa.

“One more day tomorrow to get in position. Hopefully I can play a little bit better, get off to a good start and keep it going for 18 holes.”

Ross Fisher was flirting with the cut until he eagled the seventh – his 16th – and then holed out from the fairway for another eagle at the next as he leapt to five under, with 2002 champion Sergio Garcia a further stroke off the pace after back-to-back 69s.