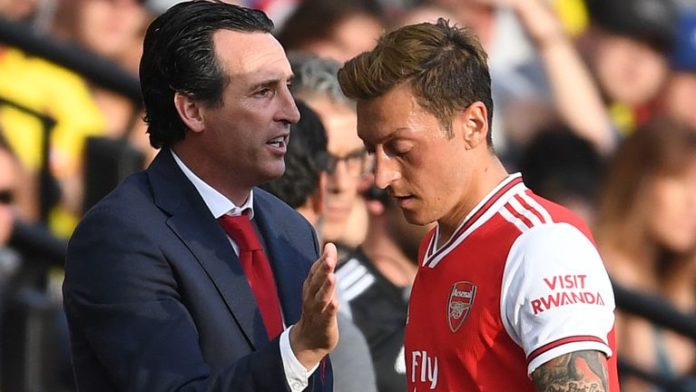 Unai Emery insists he has utmost faith in captain Granit Xhaka and the rest of the Arsenal squad as he tries to lead the club back into the Champions League.

Xhaka is set to skipper the side against Bournemouth in his second match since he was announced as Arsenal’s permanent captain last week.

The Switzerland international was the winner of a players’ vote to become captain and heads a leadership group within the squad that also contains Pierre-Emerick Aubameyang, Alexandre Lacazette, Hector Bellerin and Mesut Ozil.

“They (the players), with the vote, it gave him confidence and I also gave him that confidence after that,” Emery told Sky Sports News of the belief everyone at Arsenal has in Xhaka.

“And now – small things or big things – we are going to work individually and collectively to be strong. And also to show our supporters, and to show in our way, how we can be strong with all the players and that captain.

“I also have big confidence and trust in every player, the captain [and the others] because I think now in the dressing room we have a very good spirit.”

Arsenal rose to fourth place in the Premier League after their 1-1 draw at Manchester United on Monday night and host Bournemouth on Sunday, who sit a point and four places below them in the table.

They head into the game after Thursday’s impressive 4-0 Europa League win against Standard Liege, but Emery has his sights set on returning the club to Europe’s premier club competition.

“Our challenge in the season is to play for the possibility to win some titles, and the mentality [we have] is to go to the Champions League in the next year,” he said.

“Last year we finished outside the top four in the table but we were close. This year we want to achieve one step more ahead.”