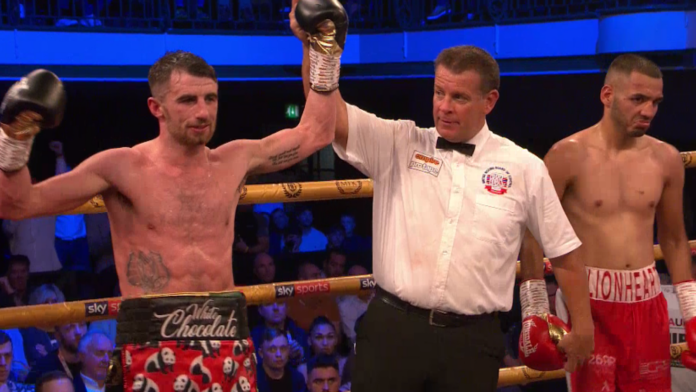 Tyrone McCullagh secured a points victory over Razaq Najib to become the first fighter to book his place in the semi-finals of the Golden Contract.

McCullagh fought off the back foot and used his superior movement to claim a 97-93 98-92 96-94 verdict from the ringside judges at London’s York Hall.

Najib, a late stand in for Mexican Carlos Araujo, took the fight to McCullagh from the opening bell but the Derry southpaw enjoyed success with his accurate counters.

The Sheffield fighter continued his aggressive start in the second, jumping in with his shots while McCullagh began to string together combinations.

After sustaining a small cut above his right eye during a scrappy third, Najib continued fighting on the front foot but McCullagh’s accuracy was keeping him ahead on the scorecards.

McCullagh kept on his toes through the middle rounds, moving in and out of range and catching Najib with counters and the odd left-hand lead.

The 29-year-old continued to pick off his weary opponent with the sharper shots as the fight entered the 10th round and Najib, with cuts above both eyes and a bloody nose, bravely tried in vain to land a knock-out punch.