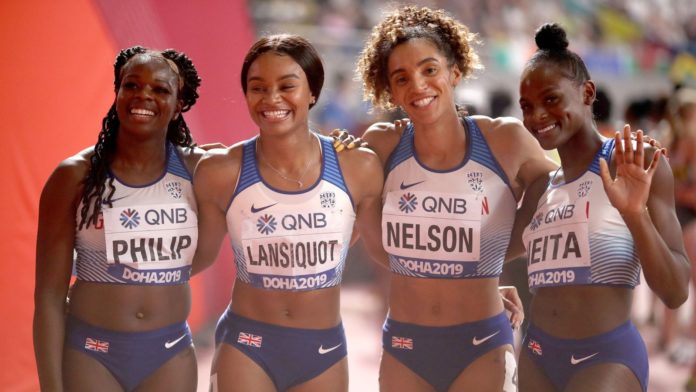 Asher-Smith won 200m gold on Wednesday, after claiming 100m silver on Sunday, and she will join the team for Saturday’s final at the Khalifa International Stadium in Doha.

Philip said: “We’re getting ready for the final.

“Dina and Kat (Johnson-Thompson) have given everyone a boost. Two gold medals and it’s a good thing for us.”

The British men, who are the defending champions, won their heat in a world-leading time this year of 37.56 seconds.

Adam Gemili, Zharnel Hughes, Richard Kilty and Nethaneel Mitchell-Blake teamed up to produce a fine performance while some of their biggest rivals struggled.

“It’s always an honour to come out with these guys.

“We were looking for redemption, especially myself, after what happened in the individuals.”

In a surprise the Jamaican squad of Oshane Bailey, Yohan Blake, Rasheed Dwyer and Tyquendo Tracey, failed to make the final, while the US squad only just scraped through.

Kerr said: “It felt very good. It was a lot better than my heat. I pushed back and felt a lot more confident.

“We all made mistakes but we got through and it’s great that all three of us are going to be standing on that start line on Sunday.”

There was a memorable gold medal for host nation Qatar, as Mutaz Barshim claimed victory in the men’s high jump.

With the crowd at Khalifa Stadium on their feet for every jump, Barshim delivered the performance they demanded by clearing 2.37 metres on his first attempt, before watching on as his rivals failed to match his effort.

Two Russians, who are in Qatar competing as neutral athletes, completed the podium with Mikhail Akimenko taking the silver and Ilya Ivanyuk the bronze.