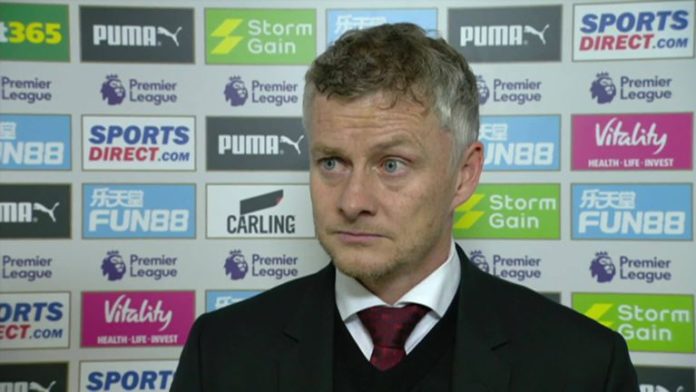 United boss concedes top-four challenge may be out of reach after winless away run stretches to 11 games with defeat at St. James’ Park

Ole Gunnar Solskjaer has called for time to transform Manchester United’s fortunes after defeat at Newcastle left him with a “big, uphill challenge” of finishing in the top four.

United succumbed to a second-half strike from Premier League debutant Matty Longstaff at St. James’ Park as their winless away record stretched to a dismal 11 games.

A third defeat of the season has left United 12th in the table with just eight points from their opening eight games – their worst start to a season in 30 years – and Solskjaer fearing objectives for the campaign may already be out of reach.

“We’ve given ourselves a big, big uphill challenge to get among the top four but it’s tight and we need to get a run together,” he told Sky Sports.

“It will take however long it will have to take. It’s a journey we’ve started on and the culture is getting there. I can’t give you any time but we’re getting there.

“We’ve come together and discussed the direction we’re going. If you only work on sunny days, you’ll never get to your destination. We’ll have these days, but we know where we want to get to.”

The start of the second international break of the season means United are not in action until Premier League leaders Liverpool travel to Old Trafford on October 19, live on Sky Sports Premier League.

For Solskjaer the intermission provides some much needed time for reflection on the season and an opportunity to work on some key areas of improvement with his players.

“We don’t create enough chances to win a game of football,” the United boss added. “Luckily for us it’s now the international break.

“We will sit down, hopefully we’ll get some players back, and we will evaluate what’s gone on over these eight games.

“It’s my responsibility. I need to sort their heads out. Young boys lacking confidence – they need some help from experienced players and staff.

“Confidence is a big thing in players, and only performances and results will give you confidence.

“At the moment, when there is a decision to be made, the players don’t do it instinctively. That’s what we’ve been working on, so it’s the perfect time for the international break.”

United goalkeeper David de Gea has echoed Solskjaer’s call for improvement after labelling the club’s current plight the worst of his eight-year spell in Manchester.

“A lot of things need to improve – everything,” the Spaniard told Sky Sports. “I don’t know what to say.

“It’s a hard moment for us. The most difficult time since I’ve been here. I don’t know why or what is happening.

“The team needs to step up. We have some big injuries but that’s no excuse. We are Manchester United, we need to keep training hard, fighting and winning games.”