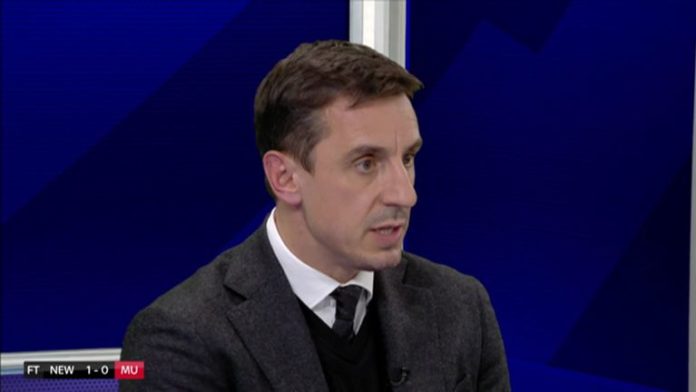 “The board need to hold their nerve. They’re responsible for this with poor recruitment, poor selection of managers, going with them and then pulling off them… Man United are now getting the pain they deserve for poor decisions at board level”

Gary Neville has slammed the Manchester United board after another poor away performance, saying they are responsible after years of poor decisions.

Ole Gunnar Solskjaer’s side fell to a 1-0 defeat at Newcastle, with Premier League debutant Matty Longstaff condemning Manchester United to an 11th successive away defeat in all competitions.

Speaking on Super Sunday, Neville was very clear about who he believes is responsible for the recent lacklustre showings, taking aim at the club’s board of directors.

He said: “Away from home, they’re not set up to win in a sense of the mentality. They let games drift, I think they play OK in games, but they’re not ruthless, they’re not clinical. The quality is not right, the depth of their squad is not good enough and they have taking a step back.

“Their recruitment has been woeful for many years and they’ve been all over the place in terms of different styles of managers who are bringing in players. They now need to fix the style, fix a way of recruiting and go and get the players. They got three in the summer of the right type, they’ve done OK so far but they need another five or six.

“They need another centre-back, they need a left-back, they need two central midfield players, they need a wide player and they need a top centre-forward. They need five or six top players in that squad and they’re going to cost a lot of money. Hopefully they can be supplemented by the young players coming through, because there is some talent in those players.

“The board need to hold their nerve. They’re responsible for this with poor recruitment, poor selection of managers, going with them and then pulling off them. They’ve also gone for different styles of managers, with Ole Gunnar Solskjaer now taking the club in a completely different direction.

“If you change direction as a board every two years, investing £250m along the way in each manager, you’re going to have big problems.

“Manchester United are now getting the pain they deserve for poor decisions at board level and Ole Gunnar Solskjaer needs to make sure that the clean-up job he’s doing, which needs to be done for the mess that’s gone before him, that he gets the opportunity to spend the money the others have had to spend.

“If Man United recruit well in the next three or four transfer windows, they’ve got the bones of something. If they recruit badly, they’ll end up suffering.”

“Manchester United will have a lot of painful moments this season, a lot of hard moments and we can have these inquests after every single game but the end solution if they’ve got to recruit well to a certain style of play and stick to it.

“They can’t do anything else, they can’t rush it, they can’t circumvent the process of the transfer window, you can’t get the players you want in January because they’re the players clubs won’t let go and they’ve got to work as hard as possible to make sure they get high quality players into the club, get the remaining players out who don’t want to be there and do it as quickly as possible.

“But there is no quick fix and it has to be done methodically. I hope, because of the poor results, they don’t come off the path they’re on which is to develop a young, progressive team but they do need some quality and experience in there.”

Graeme Souness questioned the quality of Manchester United’s players after their 2-0 defeat to West Ham a few weeks ago, and the former midfielder reiterated his belief that the current squad is the worst he has ever seen in the Premier League.

“Man United were OK today, but goals give people a lift, goals take the pressure off you and that’s where they are right now,” he said.

“But it’s Man United, one of the biggest football clubs in the world and they’re a world away where they were for a good few years before that.

“They have to strip it right back to the basics but they just don’t have the quality in there. It’s alright saying players are missing but even with them, I don’t see it changing very much.

“I said it a couple of weeks ago, this is the most average group of Man United players in the history of the Premier League. They’re good players and they’re giving it their all but they’re just not good enough.”

Jamie Redknapp also believes that Man United are mirroring the way Liverpool conducted business around 20 years ago, explaining: “Man United right now are making all the mistakes that Liverpool made in the 90s and early 2000s – trying to change managers, chasing different patterns, looking at how we can make things right.

“Ole Gunnar Solskjaer is a very lucky man to be managing Man United. He shouldn’t go from Cardiff to Molde to Man United manager, that shouldn’t be the transition. You need a real manager doing it like a Jurgen Klopp or a Pep Guardiola. So if you get rid of him now, where do you go?

“It’s impossible to pick the United team right now. What’s their best XI? Those players today still cost £250m so that suggests to me they’re getting it so wrong with all the players they’ve got. Paul Pogba gets blamed all the time but he’s not playing at the moment so you can’t blame him.

“From top to bottom, the United team and the owners, the people who are buying the players, need to seriously change what they’re doing.”