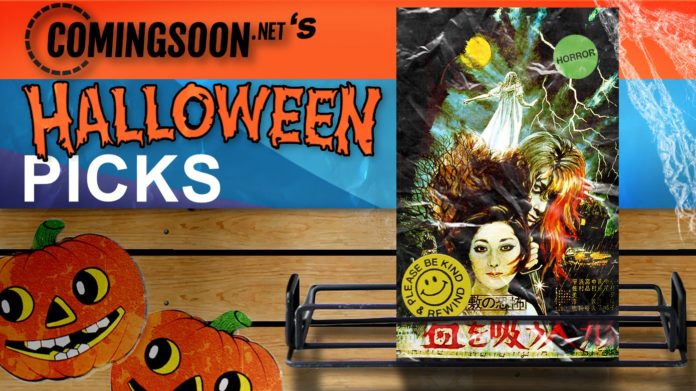 Every day for the month of October, Coming Soon is making a new horror movie recommendation for those eager to find a new frightening flick for Halloween. From the creepy goodness of a classy ghost story to a blood-spattered gorefest and everything in between, we’ll have something for every taste of horror. And today’s pick is…..

What’s The Vampire Doll about: A young man named Kazuhiko (Atsuo Nakamura) goes to visit his fiancé Yuko (Yukiko Kobayashi) at her family’s secluded country home, but when he arrives he’s told by her mother (Yoko Minazake) that she was recently killed in a car accident. However, when Kazuhiko himself goes missing, his sister Keiko (Kayo Matsuo) and her fiancé Hiroshi (Akira Nakao) head to the same country house to investigate. Strange and scary doings ensue.

Why The Vampire Doll rules: Throughout the 60’s many of the Japanese horror pictures that made their way to America took place during the feudal/Edo era, such as Kwaidan or Kuroneko. But in 1970 director Michio Yamamoto and Toho Studios kicked off a trilogy of contemporary gothic horror films in the same western tradition as Britain’s Hammer or Amicus. The Vampire Doll, as well as its loose sequels Lake of Dracula (1971) and Evil of Dracula (1975), is brimming with pale women, thunderstorms and fiendish ghouls that make for some genuine scares.

How scary is The Vampire Doll: Fans of John Carpenter’s atmospheric early work like Halloween and The Fog will find much to savor, as the films have a similar minimalist widescreen look and chilling electronic-tinged soundtrack. There is some blood and nudity, but it’s more about intensity and a slow burn build to an eerie climax. The Vampire Doll (also known in the U.S. as “The Night of the Vampire” or “Legacy of Dracula”) is one of only six feature films made by Yamamoto. We HIGHLY recommend watching all three films in his Bloodthirsty Trilogy to get the maximum effect. Even if you find the plots a bit rote, there’s no question the atmosphere makes them the perfect films to throw on in the background of your Halloween get-together!

Be on the lookout for: Several of the rainy establishing shots of the secluded country house are achieved with a miniature scale model, not unlike those seen in Toho’s Godzilla movies! It adds to the overall dreamy nature of the film.

Where to watch The Vampire Doll is streaming free on Amazon Prime Video for members, though we recommend purchasing Arrow Video’s stunning Blu-ray set of the entire Bloodthirsty Trilogy.