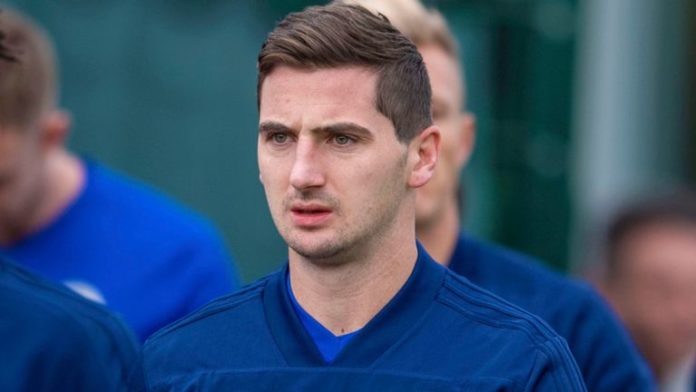 Russia vs Scotland is live on Sky Sports Football on Thursday; kick-off 7.45pm

Scotland have lost Kenny McLean for their European Championship qualifier against Russia in Moscow on Thursday.

The midfielder has returned to Norwich after failing to overcome a minor injury problem.

Manager Steve Clarke, who lost McLean’s Norwich team-mate Grant Hanley and Rangers midfielder Ryan Jack at the weekend, said: “It’s always disappointing when you lose players from the squad and overnight we have lost Kenny McLean as well.

“It’s another blow but a great chance for someone else. It’s part and parcel of international football.”

Clarke, who is also missing Scott McTominay through suspension, added: “It’s always disappointing to lose a player so late in the week.

“When Kenny reported, he had a little niggle – it’s not correct for me to say what it is, that’s for his club to work out – we were all pretty confident that Kenny would make it, but the last 24 hours it didn’t get any better, it actually got a little bit worse.

“So we made the decision to allow Kenny to go back to Norwich.”

The Scotland boss has already given up on automatic qualification, with Scotland nine points off second-placed Russia with four games left while the hosts are also 22 goals better off.

Clarke is building for the play-offs in March but he will not sacrifice the potential to get results to experiment.

“No free hits,” Clarke said at the Luzhniki Stadium. “I would like to pick up 12 points from the remaining four games. Obviously it’s a tough one in Russia but there’s no free hits.

“We owe it to the thousand or so Tartan Army fans that are coming over as well to put on a good performance and hopefully go away with three points.

“My belief is always that if your performance level is good enough, the points will follow.”

Steve Clarke has admitted that Scotland will not qualify via this group and that the play-offs are the only realistic route to Euro 2020. With four games to go, Clarke needs to mould a team capable of going into the play-offs with confidence, of establishing an understanding, and playing in a way that can get results. Russia is the next and toughest of those four games. The head coach says none of the matches will be free hits and is demanding victories.

Injuries, suspensions and players asking to be left out of his squad has hampered his attempts to try to build a consistent way of playing and selecting teams. Conceding nine goals in the past three games, despite two of the matches being against Belgium, shows Clarke needs to improve his side defensively. The team have also only scored once in those three games and are not providing enough of a goal threat.

Scotland have players in the squad playing at the highest level in England and performing well for their clubs – transferring that to the international scene is proving difficult just now. The players who have been turning up have the chance to stake a claim for the playoffs in March. Scotland are under pressure to qualify given Hampden Park is a host venue and a meeting with England is on the cards in the finals if both qualify.

Artem Dzyuba is Russia’s captain and major threat. He scored the equaliser at Hampden last month and could have scored more. The big striker will be a handful for the Scotland defence. Whoever is tasked with marking him will be in for a game.

Scotland head back to Hampden for a game on Sunday against San Marino – the microstate is ranked as the worst team in the world in the FIFA rankings. You could fit all 33,000 occupants of the country inside Hampden and still have 19,000 spare seats. A lacklustre 2-0 win in March in Serravalle did nothing to build confidence or momentum and was Alex McLeish’s last game in charge. There will be an expectancy and desire to win and win big.

Russia vs Scotland is live on Sky Sports Football on Thursday; kick-off 7.45pm