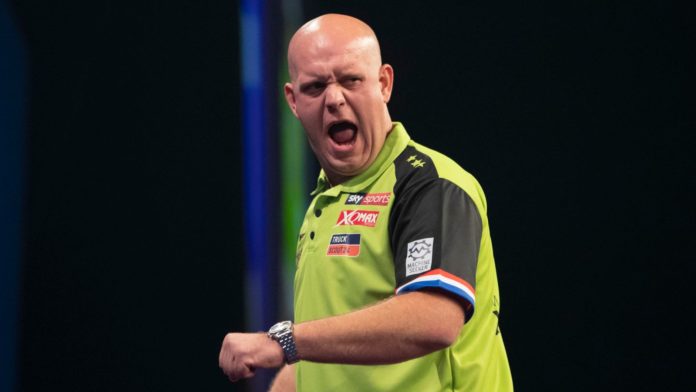 Dominant Dutchman too good for Chizzy to claim 12th title of the year and £110,000 winner’s prize

By Paul Prenderville at the Citywest Hotel

Michael van Gerwen added another major PDC title to his overflowing CV by beating Dave Chisnall 5-2 to retain the World Grand Prix title on the outskirts of Dublin.

In a high-quality contest that saw both men average more than 90 and five of the seven sets go the distance, Van Gerwen produced at the pivotal moments to retain the title he won last year by the same scoreline.

Chisnall fired in 12 180s but remarkably it was not enough as MVG claimed the third, fourth and all-important seventh sets in a deciding fifth leg, cranking up the pressure on Chizzy with a brutal display of cover shooting on treble 19 and three 100+ finishes to extend his winning run in the tournament to 10 matches.

Chisnall suffered a fifth successive defeat in major finals, a third at the hands of Van Gerwen but it’s now five Grand Prix crowns for the brilliant Dutchman, who has also won the World Championship, the Masters and the Premier League this year and has fired an ominous warning ahead of the busiest time of the darting year.

Darts is back on your Sky Sports screens next month with the Grand Slam of Darts, nine days of coverage from the Aldersley Leisure Village gets underway on Saturday November 9.