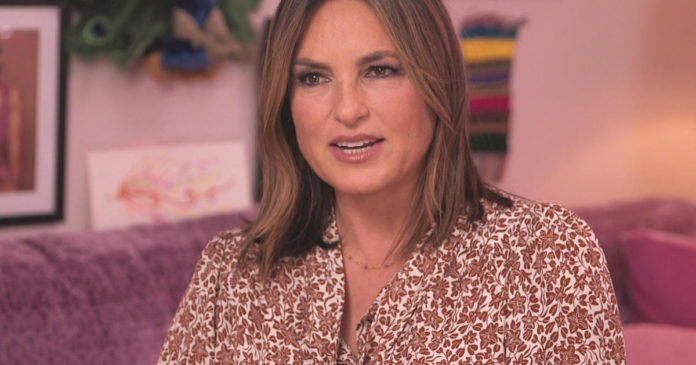 She showed “CBS This Morning: Saturday” co-host Michelle Miller her show’s interrogation room. “I’ve never even gone in here with a skirt,” she said.

“Olivia Benson, on the force for 21 years. She could be ready for retirement, the pension,” said Miller. “What keeps her going?”

“I think that there is an innate need for justice, to right wrongs, almost to the point of a character flaw,” Hargitay replied.

Her character resonated with viewers from Day One. “It became very apparent to me early on, we needed a compassionate, empathetic figure that would fight for women, fight for survivors, and treat people with the respect they deserved,” she said.

It is a role Hargitay herself has embraced on-screen, and off-.

Miller asked, “How much has she gotten into you?”

“Are we gonna cry this early?” Hargitay laughed. “No, no, no, no, no, no. Listen … a lot. This show and this character has profoundly changed the trajectory of my life.”

That life began in the spotlight, as the daughter of movie star Jayne Mansfield. Her mother was killed in a gruesome auto accident when Mariska was just three years old, asleep with her two brothers in the back seat.

Miller asked, “Take me through how therapy helped you through that.”

“I think it saved my life,” Hargitay said. “Trauma freezes us. And I think people don’t fully understand how powerful it is.”

“You equated it to PTSD?”

She was raised by her father, Hungarian-born actor and body-builder Mickey Hargitay. “He just taught me about excellence and never quitting,” she said. “Because he accomplished so much against all odds, and so there was no excuse, ever. He was like, ‘How bad do you want it? I guess you didn’t want it.'”

Mickey Hargitay died in 2006, but lived long enough to see his daughter win the Emmy for Outstanding Lead Actress in a Drama Series. “I left the awards show that night, and went to the hospital where my father was, and I gave him the Emmy because I felt like he was the reason that I got it in the first place,” she said.

Her role also inspired her activism: “I started getting letters from survivors disclosing their stories of abuse – that was when I went, ‘Oh,'” Hargitay said.

She started Joyful Heart, a foundation to support victims of sexual assault and violence, and produced a documentary exposing the enormous backlog of untested rape kits in this country, “I Am Evidence.”

Hargitay said, “I think if I was outraged and shocked at the statistics of sexual assault, I thought my head was gonna explode when I learned about hundreds of thousands of untested rape kits, sitting on shelves, being ignored, saying, ‘You don’t matter and what happened to you doesn’t matter.'”

“SVU” creator Dick Wolf called Hargitay the mother of #MeToo, and said that when the show began in 1999, the subject of sexual harassment and assault was taboo. “Those stories weren’t out there.”

Miller asked him, “Did you ever imagine that this show, and Mariska, would resonate in the way it has for as long as it has?”

“Oh, absolutely!” Wolf laughed. “I knew right away it was going to run for 21 years!”

When Hargitay’s longtime co-star Chris Meloni left the show in 2011, she thought about quitting herself.  “I didn’t want to quit because of fear,” she said. She’s been carrying the show for nine seasons now.

These days, Hargitay is executive producer, and she also directs. Her husband, Peter Hermann, plays defense attorney Trevor Langan, and now stars in his own show, “Younger.”

Hargitay says she hasn’t directed her husband, “but we work on things together now.”

They were married in 2004, and now have three children. Miller caught up with them at Citi Field, where Hargitay was throwing out the first pitch for the New York Mets.

Miller said, “Your family unit seems so intact. This is a tough show. You have, like, 10-, 12-hour days sometimes?”

“Do you mean 14-and-a-half every day?” Hargitay laughed.

And yet, here she is back on the set, doing it all and keeping it real. “I love being a work in progress, and I’ve made so much peace with that.”

To watch a trailer for the documentary “I Am Evidence” click on the video player below:

‘Two down, four to go’: Pythons pay tribute as Terry Jones dies with wife by side

Kid Culture is 18, produced a hit for Justin Bieber and may be the future of the Grammys

Blake Shelton and Gwen Stefani drop ‘Nobody But You’ music video